Wichita Witchy on Plagiarism, Take Home Exams, and Getting Married! 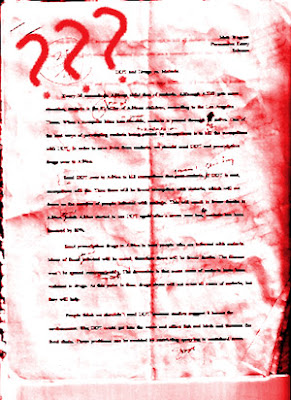 It's that time of the year again, and I am once again assigning take-home exams in lieu of holding them during finals week even though it is strictly against Grungy College's policy. I don't even bother writing a letter to the dean explaining my decision, for what would I say? That the College's scheduling such exams practically on Christmas Eve is ideal neither for my students nor for me since we're already equally fed up with each other, the course, the school, and the city, and we can't wait around until the last minute to make travel plans since airplane tickets are soaring as it is. Besides, I'm getting married, and the last thing I want to bring to my destination wedding is a pile of illegible, ink-stained, snot-covered, swine-flu infested blue books. I'll miss the hearts over their i's, though.

Assigning take-home exams raises all sort of issues, however, all of which could be avoided if the students ever followed directions. But they never do - even when you spell these out in bold on the assignment sheet and go over the same shit at the beginning of every goddamn class. I am not sure if it has to do with a shortage of office supplies in the nation or that of brain cells, but I just don't get why it's so fucking difficult to place the final draft on top of the rough draft and staple the two together. And then there's the "back-up" electronic copy: time and again, on the syllabus and on every assignment, I let them know that I cannot open a certain pesky format and that, in case they really are so fucking dumb that they cannot figure out what a compatible file is, they should copy/paste their work into the body of the email for safety. But they never do. And please don't give me this "It's my first semester" crap; Grungy College or not, you're not a complete moron, and, contrary to what you think, nor am I. I am placing bets on who the "smart" ones turn out to be. It'll be a fun game for me on my honeymoon. Thank god my future husband also teaches at Silly College and feels my pain.

But, let's say, they've managed to submit their masterpieces correctly, then there's the real issue of whether or not these are plagiarized. This, to me, is the main detriment to offering take-homes. In my 11 semesters of teaching, I have reported at least 20 cases of plagiarism, some of them involving repeated offenders, and about half on the final exam - which, according to the carefully phrased policy stated on the course syllabus, results in an F not just for the assignment but for the entire course. I warn them ahead of time; I try to write idiosyncratic assignments with specific guidelines; I ask to see at least part of their work in stages; and I specifically say that Interwebopedia is not a legitimate source. But it doesn't do shit.

Yesterday, at a faculty workshop on academic integrity, I found out that I am sort of a superstar at the Office of Student Affairs, and that each time they see an intracampus envelope, they say, "There she goes again." I am fairly certain I'm the only one at my department who ever bothers, and I do envy everyone else, especially the full-time folks who don't have to teach 5 classes a semester to pay their rent, who can do their own research or just plain hang during that hour+ I spend on researching, documenting, and writing up a typical case. I was ecstatic when some of my students were contacted by the dean and, as punishment, asked to read a book on how to read a book; but my high was short-lived once I realized that sanctions like these were, ultimately, unenforceable. Maybe better schools have better disciplinary sanctions, but with most professors not caring enough to report, and the higher echelons not having the balls to expel plagiarists, the students are getting the message that it's Okay. Cry a little. Get an F, maybe. Retake the course and make the College that much more wealthier. Repeat.

I absolutely hate confronting plagiarists. I hate making people lie. I hate making them cry. I hate the follow-up emails in which they tell me that they're first-generation immigrants who have to work three jobs to take care of their families and that they didn't have enough time and didn't think that "doing some extra reading" was wrong. I hate it because I would like to think that I am a kind, understanding person, and that had they contacted me in advance, we would have worked something out. But once I see the inconsistency in style or the vertical apostrophe or the differently spelled Greek name, I take it personally because they either don't care or must think I'm a total idiot. Or both. I am already doing all those things designed to deter plagiarism which my colleagues suggested at the meeting--all those things which, they admitted, require extra time on our part. I get reimbursed for administering final exams: two hours per class. Yet, how many more hours will I spend on confirming my suspicions, tracking down the offenders, and then crying over how I have failed as an educator?!

I truly hope that, unlike my marriage, I shall not hold this job for as long as I live.