Archie at the AHA. Day One Report. 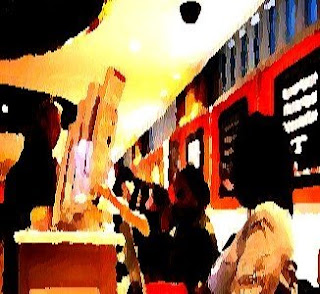 OK, so technically it’s the afternoon, but that acrid stench of fear hits me as soon as I get to the other side of the revolving door. I wouldn’t say that I’d forgotten the smell of the AHA. More like I’d suppressed it in the six years since I last attended one. Man I hate the AHA. The desperate expressions on the faces of the job-seekers; the smug turd expressions on the faces of the fat, dusty white guys; the overdressed butt-suckers on the lookout for someone famous to accost; the hyper-competitive grad-flakes trying to humiliate each other with how many interviews they scored this year, even though they all know it means nothing unless they can close the deal at a campus interview; I hate it all. But hey, it’s a new year (at least that’s what I think my two-day hangover is telling me) so I should have a better attitude.

So just to prove that academics shouldn’t even be allowed to plan a cluster fuck, this year’s meeting features an "improved” registration system. If you pre-registered, you wait in line to use one of several laptop computers. You look up your name and press print. Then you go stand in line and wait for one of the graduate student volunteers to call your name and hand you your badge. How this constitutes an improvement over the cardboard box full of alphabetized envelopes is beyond me. In the twenty minutes I stood there, the system crashed twice, and the whole show ground to a screeching halt. Only an asshat academic could have been talked into paying someone for this. On a related note, they made the poor grad student workers wear these red AHA T-Shirts that make them look like they are trying out for Santa’s workshop. Just sad.

While I’m standing in line waiting for the tech support guy to fix the stupid registration computers, I overhear a couple of grad students here for their first job-market experience complaining about how much it costs to register for this shindig. On the one hand, they are right, the AHA ass-rapes members and non-members alike. On the other hand, were they really too fucking stupid to figure out that no one cares if they actually register? I’ve been to more AHAs than I care to remember, and this is only the second time I’ve ever registered. And let me tell you, if my department hadn’t paid both times, there was no way I was doing it. When I had no job I would crash on a friend’s couch, go to my interviews, and then go get bent at some cheap dive. No badge required for that, just a legal form of ID and a couple of Andrew Jacksons. The only area in the whole conference where they check your badge is at the book exhibit, and when I had no money for books I saw no reason to go there. The way I figured things, the library had the same books for free. Anyway, anybody without a job who forks over the registration fee for this thing is an idiot. Or a goodie-goodie, which so often amounts to the same thing. Did I mention I hate sanctimonious goodie-goodies? Which raises the inevitable question of how the fuck I wound up in a profession full of them? But that’s a story for another day.

So it’s day one, and I have nothing to do. Should I go to a panel? In my experience, most AHA panels are a mixed bag. Some junior person really goes all out to impress, while the senior people on the same panel just throw some bullshit together at the last minute and expect everyone to swallow it. Then there is the fact that the AHA program always features a good number of sponsored panels—the Catholic History Association sponsors something like six every year, for example. These papers and panels are automatic acceptances. They aren’t vetted by anyone. Some junior faculty schmo, who didn’t have the good sense to stare intently at the floor when they were looking for volunteers at some other conference, gets tasked with roping a few willing idiots into a panel. And did I mention that this year I am one of the willing idiots? In a moment of weakness for which I may never forgive myself, I allowed a total stranger to sweet-talk me into giving a paper. What was I thinking? OK, I know what I was thinking: I have piles of material left over from a recently completed book that I should be working into articles, provided I can find a fresh angle that doesn’t just needlessly repeat the arguments from the book. So foolishly I thought I could use this as an excuse to jump start the process. But what’s the point? No one will come, as they will all be either scurrying from interview to interview; sitting in a hotel suite conducting said interviews; watching porn on the hotel’s pay-per-view; or sitting in the bar getting hammered. I know that it ain’t the size of the audience that matters (or at least so I’m told), but I would still rather have more than five people in attendance. I mean if the point is to get some useful feedback to help me get my thoughts in order for an article, then I’ve really come to the wrong place. It doesn’t help that I am geographically and chronologically an outlier in the field that the panel addresses. I predict the other presenters will get all the questions and I will sit there like a dumb-ass until it the clock mercifully strikes ninety minutes.

But all that lies in the future. Right now it’s Friday night (ok, technically it’s late afternoon) and I’m heading for the bar. Maybe some other degenerate of my acquaintance will be there and I won’t have to suffer the silent shame of drinking alone in a room full of nerds. This also may mean the end of my blogging for today, if all goes according to plan.

OK, what the fuck? I can’t find a single friendly face in the hotel bar at the AH-fucking-A? Guess I will be drinking alone in a room full of nerds, at least for a while. This will give me time to scan the room and view the rich variety of academic wildlife. You can spot the job-seekers a mile away. They are the ones with the tense jaws and looks of grim determination. Occasionally they remember that they are supposed to look friendly, so they break out into these utterly fake smiles. Who knows what these people are really like in their daily lives. The AHA warps them beyond recognition, into paranoid schizophrenics with a mild homicidal streak. I read somewhere that something like 80% of academics are on some kind of mood stabilizing medication. Some of these kids should have doubled up on their dosage for this event. At any rate, I think that’s what I hate most about this conference: the way it leads people to behave in fucked up ways. In fact, if I don’t find a drinking buddy soon, I may have to go to a strip-club. It would be less demeaning, and the strippers are probably behaving more authentically than the people in this room. Man, now that’s a depressing thought. Then there are the aca-mullett sporting, grade A weirdos. They are congregating in a corner, drinking the house plonk, and laughing just a little too loud at some seriously lame jokes. Must be medievalists. There’s a couple of graybeards sitting at the corner of the bar opposite me. I have no idea who they are, but every younger person who passes by slows down and does that weird neck-craning thing trying to get a look at these guys’ nametags to see if they are someone whose ass could use a good licking. Yeah baby, just one more thing to hate about this conference.

Most of the conversations I am overhearing are about the number of searches that got cancelled because of the stock market crash. I have to say, I would not want to be a freshly-minted Ph.D. looking for a job this year. There are a lot of things I could say about the cutbacks, but I will just quote Marc Bousquet (if you don’t know him, check out his blog—how the university works), who wisely observed that “administrators love austerity” because it gives them the excuse they have long been looking for to cut back on the number of tt faculty and hire more adjuncts. For example, my spouse’s institution (I know, academic couples are more disgusting than week-old dog-puke) saw its endowment triple in the last sixteen years or so. They’ve recently lost a third of those gains so they’ve cancelled everything for this year and probably next as well. Their endowment is still more than double what it was in the 90s and they’re pleading poverty? Give me a fucking break. They still have plenty of money to hire new faculty. They just don’t want to, because they see this as an incremental step towards getting rid of the tenure-track altogether. It’s Total Quality Management baby. My institution has yet to freeze anything, but I won’t be surprised if the search I am on gets the axe before January is out. On that depressing note, I’m going to call it a blogging day. A couple of grad students from my department just walked in, and noblesse oblige dictates that they drink on my dime today. See, I do try to be kind to them in my own fucked up way, because that’s just the way I fucking roll.