Otto the Outsider With a New Year's Plan For Those of Us Overwhelmed and Ornery. 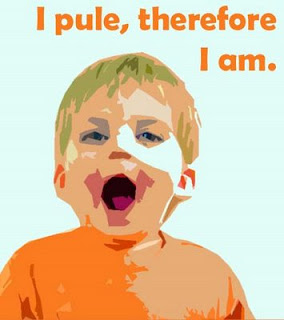 I'm one of those outsiders who read RYS addictively because the posts make my jaw drop with astonishment (it's good to still be astonishable in one's fifties) and because they confirm that I made a good choice in not becoming an academic (I'd have reached my limit and killed a puling student or annoying colleague long ago). I'm sure a lot of your readers check out the blog so they can say, "What's wrong with kids these days?" and I do a lot of that myself. But sometimes all I can think is "What the hell is wrong with professors these days?"

At least once a week during grading season, it seems, one of your contributors describes being cornered by a desperate student who whines,"But I NEED an A in this course." And fairly regularly, throughout the semester, profs complain about students texting or answering calls during class.

Given the predictability of both scenarios, why don't professors start off the semester with a pre-emptive semi-smackdown that addresses these problems before they occur? What's wrong with saying something like:

"Before you sit down in my class, turn your cell phones off. No, don't put them on vibrate - turn them off. Because if you get a call and answer it in class or I see you texting when you're supposed to be listening, you'll be out the door and marked as absent, and that will affect your grade and your GPA and so on and so forth, so let's just not even go there. Cell phones off, no exceptions.

"Also, at the end of every semester [quarter], I can count on a certain number of students emailing me or showing up in my office to say, 'But professor, I NEED an A in this course.' So let me clue you all in right now:if you need an A, come to class and participate in the discussions, do the assignments, take the tests, and do an above-average job with all of these things. That's how you earn an above-average grade. That's right - I don't give you grades, you EARN them." (If you're of a certain age, you can put a little John Houseman spin on the word "earn" - won't mean a damn thing to your snowflakes, but it may provide a tiny moment of auto-amusement for those who remember the Smith-Barney commercials of yester-decade.)

Even if you're afraid of not being liked, it's better to be a hardass on the very first day and *then* show them your friendly, good-guy side as the semester wears on. They might leave the class liking you. The alternative is trolling spinelessly for their affection from the start and then being dismissed as an asshole at the end of the class because they thought you were their pal and then it turns out you had this crazy policy about grading according to the quality of the work they do.

Grow a spine and save yourselves some tsuris.