Day 2 for Archie at the AHA. 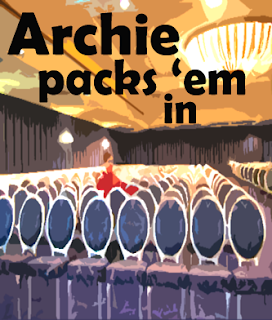 Day 2 and I am already fucked. Part of it is the weird schedule this year, where the conference started on Friday instead of Thursday. Part of it is the association party at which I am a habitual attendee. It normally features an open bar, but apparently New York prices have driven it to have a cash bar instead. What the fuck? How am I supposed to get the hair of dog that bit the fuck out of me on new year’s if I have to fork over... This is just not right. I want to get bent on someone else’s dime. So day 2 was slightly more eventful. I spent several hours in a hotel suite interviewing candidates, and I gave that paper I groused about yesterday.

Typical AHA panel. Junior person goes all out by giving a thoughtful presentation that meets the time constraints and actually gives a nice synthetic overview of the book project that is still in revisions. In between person (me) who sticks to the limit while trying out some new ideas on leftovers from a completed book project. Then the classic AHA session-killer: the super-senior person who shows up with no paper (no joke), asks the chair/moderator how long he is supposed to talk, and proceeds to eat up 40 minutes (also not a joke I am afraid) of everyone’s time before the moderator actually rips the microphone from his hands. Now that’s scholarship baby!!! A catastrophe of epic proportions that could have been avoided if senior person had taken a second to remember how much text actually works into 20 minutes of speech. This is not hard people! Two minutes per page of double spaced text: a rule of fucking thumb that actually works.

As for the interviews, I’d love to offer some serious smackdown in the spirit of my MLA attending colleagues. But in violation of all my previous experiences, only one candidate self-immolated. Having said that, it was an epic case of self-immolation. Allow me to digress.

Here’s a hint to the grad-flakes in the audience: the first question you will face in every AHA interview (and I mean every single fucking one) is some variation on the old standby, “tell us about your shitty fucking work and its relationship to the boring-ass field.” This is a softball. This is the easiest motherfucking question you can get. You should have a 45 second answer to this question in your back pocket. And when I say 45 second, I mean 45 fucking seconds and not a second more. Practice it in the mirror if you have to. Go to an acting coach if you must. But if you cannot state the importance of your work and its relationship to the field in 45 seconds or less, you are not getting the job. Sometimes candidates can get away with a 90 second answer if they have charm, but your goal should be 45 seconds. I mention this because today the self-immolating candidate took up the entire interview trying to answer this question. And I tried to stop him. My colleagues tried to interrupt. But he was having none of it. He spent 40 minutes trying to answer the question. And when we told him his time was up, he said “I guess what I’m trying to say is that my ideas are really complex.”

Here’s your hint for the day, Fuckstick: if your ideas are so complex that you are incapable of articulating them, you may wish to go back to the proverbial drawing board and start over. Jesus H Fucking Christ on a unicycle, I would like to blame the advisors for this debacle, but the candidate has to share the responsibility here. I could expand on this, but I may leave it for another post. As a secondary matter, I would advise all of you to have something better than “what’s your timetable?” when the committee asks you if you have any questions for their tired asses. Ask about team-teaching, ask about the students, ask any fucking question that shows you have even a moderate interest in the job. It is obviously cool to ask what the timetable is, but don’t let that be your only question. Other than that, the interviewees were all surprisingly competent. Some were pedestrian, to be sure, but no one else decided to flat-out pull down their pants and fuck the dog in front of the whole committee. I count that as a victory. Which is a sad fucking commentary on my life and the profession in general.

P.S. of course tomorrow is another day. And another group of interviewees. So stay tuned.