Shloyme from Sacramento Blogging from the Association for Jewish Studies Conference 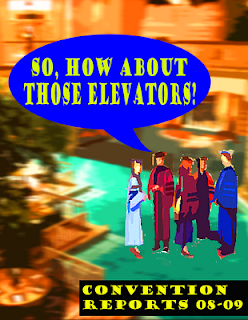 This isn’t really the blog I intended because the f***g hotel (Grand Hyatt indeed!) didn’t have internet service unless you were a registered guest and I was staying with grad school friends in Georgetown. Charging extra for using the internet at an academic conference is about as obnoxious as the fee I had to pay to check my FIRST bag at the airport.

On the morning of the conference I woke up at four to double-check the time for my interview and realized that I had screwed it up by several hours—confused a coffee date with the interview time. Got up and spent the next two hours on the web reading up on the department that is doing the hire. My first thought is: I'm fucked. I forgot that someone in the field whose work is utter shit—outdated exceptionalist triumphalist shit—is a bigwig in the department. Luckily he wasn’t at the interview.

The position is a really big step up from my current one and I want this job. I’ve been at my current one for 2 years now—a 3-4 teaching load at a college that thinks it’s a serious research institute but does nothing actually to support research other than to tell us we’re not doing enough research (while yanking our research funds). Happily, the interview went really well. But like every search that I’ve heard about, they weren’t confident that there will be any money to make a hire—even if they are allowed to do flybacks. Friends with interviews at other schools were told the same thing. I learned that some schools skipped the conference stage altogether so as to lock in their pick before the well runs dry. They actually held campus visits during finals week.

Like everywhere, the buzz at the AJS was all about the economic crisis. Surprising, however, was the extent to which people were really freaking out about it. Besides that, there were very few jobs available—the whole Madoff affair means that Jewish philanthropists are cutting way back on their annual donations to programs. Worse still is that endowments for Jewish Studies programs are in freefall. Yeshiva University—as was announced in today’s NYTimes—is out 110 million bucks. One of the serious bigwigs who has supported dozens of academic programs around the US is reportedly out 1/3 of his money because of Madoff. We’re fucked. People who are on the market for the first time are doubly-fucked, because postdocs (which were once in abundance and were a reliable backup plan) are going to dry up even faster. Judaic Studies had been a great field (job-wise at least) for many years. Since the early 1990s, it was expanding and as a student I watched my more advanced classmates get positions and move onward and upward. There were lots of donors who sought to make their name by endowing chairs and departments in Jewish Studies.

The problem is that Jewish Studies programs are so often overly-dependent on private sponsorship. Universities have looked upon them as potential cash cows, and often launched them recklessly—even before serious money was in the bank. I have a colleague who, when on the market a couple of years ago, was told outright at the job interview that they weren’t interested in her field of study, but that they were looking to hire a Jewish Studies prof. in the hope that it would bring money to the department. The gripe was always that these donors used to dictate what we taught. More Holocaust! More Israel! Now we are waking up to the fact that not only have we created entire programs to satisfy the whims of donors, but the programs are also fully dependent on the whims of the marketplace. We could probably weather a mild recession ok, a serious one like now makes it harder. Something like the Madoff affair has got people using apocalyptic language.

Fitting highlight of the AJS: at 6:30 on Monday night, people began to gather in the hotel’s Starbucks to light Hanukkah menorahs. Candles apparently were forbidden in the rooms. About a dozen small groups gathered around their respective menorahs, lit the candles, and began to sing the prayers. Then somebody opened a side door bringing in a huge blast of arctic wind—blowing every candle out. Legal discussions ensued about whether it was kosher to relight them.