"Yo, Proffie. You're Disturbing My Meal." 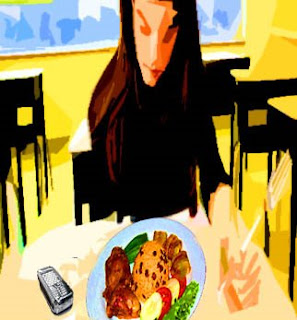 I have a strict "no cell phones in class" policy that reflects the University's policy. My class meets once weekly and the second half of class is a feature-length film screening. What really galls me is when students use their phones during screenings, thinking somehow how those bright lights are not visible and therefore not distracting. But that is beside the point; it's NOT ALLOWED.

One night a student repeatedly kept using his phone even when I asked him to put it away three times! His excuse that night when I spoke to him after class? His dog was having health issues and his mother was texting him updates. I said it didn't matter--if he felt he had an emergency he was to leave the room. And he brought the phone out again later in the semester and got yelled at again. This nimrod also failed the mid-term by failing to properly read the instructions.

He wasn't the only one to violate this rule. But humiliating them in front of their classmates and interrupting the film screening didn't seem to faze anyone. My mistake, and the one which led tot he ruination of my authority in the classroom? Not asking these inconsiderate assholes to leave the room and not bother coming back.

Students also took advantage of my relaxing the "no food in the classrooms" rule by taking extra long breaks (they are normally given ten minutes) and taking twenty or thirty minute to get food and saunter in late. I repeatedly commented that this was not acceptable. The behavior continued. At the last class, which consisted of only one screening, two students came in thirty minutes late toting free burritos given away a local eatery. When asked if they had a reason for being so late, one of them said "No."

This same kid also mocked the cell phone rule by turning it on every class just as he was leaving and playing some loud piece of video and holding it up in the doorway. Nice, That would be a ZERO for your class participation portion of the grade, moron.

Next semester is my last semester. I plan to implement these rules more strictly. Any violation of the cell phone rule will be met with a request to leave the class for the rest of the night. Anyone coming in late from the break will be marked absent. My failure to be more strict during this past semester with a particularly rowdy group resulted in my authority becoming a joke among the yahoos, and a source of irritation for the engaged students.