What One Student Can Do. Whitney from Wichita Withstands a Whiner.


I am notorious for being a little too happy in the classroom. What can I say, I truly do love my job, and love what I teach (humanities/English at the CC level, by the way, year two on the TT). Most students enjoy my classes and appreciate my efforts to make composition fun and meaningful -- okay, not fun. But as painless as possible. But this girl was different. This one actually resented, nay hated, me for being happy. ("I don't understand happiness. I've never been happy, and I never will.") 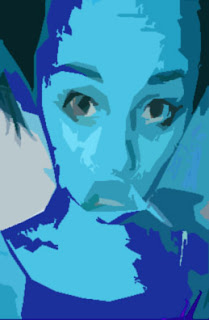 I noticed her immediately when I entered the classroom. Which just so happened to be NEXT DOOR to my own office. Oh my god. This is going nowhere good. She sat and glared at me with the kind of scowl I had never actually seen before except in the movies. That was on Monday. On Wednesday, as I prepared myself for class (got in character, if you will), she appeared in my door, with her lovely frown on. "I have a problem." She stated. To be honest, I don't remember what her problem was, but I definitely remember my response (well, the response in my head): So do I: You! But alas, I smiled and asked her what her problem was and how I could help. (I mean really. Did she think an English class would not require her to save a fucking file??? And just how is that an unreasonable think to make her do?) I didn't know then what this person had been through, or just how much she hated me and the world around her, but I knew she would be trouble.

I had no idea how much trouble, and it haunts me to this day. Without going into any details, which would assuredly give both our identities away - but entertain the hell out of RYS readers - her conversations with me and her first paper were so disturbing that I had constant visions of Virginia Tech. The colleagues who share my corner of the world were all aware of her. My office mate - thank god - was on office hours during the time I was in this class, so he was a witness to 99% of her shit. (Not the way she looked at me in class, but by the way she treated me in the office before class every fucking day, he could figure that part out without too much trouble.)

I wanted to get my boss involved, but was concerned that this chick had served her time and paid her dues, and she just needed someone to be nice to her. (Messiah complex anyone?)

But it seemed to be working. By conference time for Essay #2, she stopped being mean and hateful, and I was introduced to her alter-ego, SuperWhiner. (Honestly, in my 4 years of teaching, hell, in my 33 years of life, I've NEVER heard whining at this level before, save perhaps from my 7 year old niece 3 years ago, and even she has nothing on this chick.)

But in the face of it all, I stood my ground. Twice I decided it was time to bring in the big guns and get the dean involved. But the first time I got my nerve up, Dean chose that day for a little vacay. The second time, I caught her teaching her own class and just never made it back.

Things actually seemed to be getting better until the last two weeks of the term, when, well, I'll spare you the details, but now the dean is involved and she knows everything. And here's the kicker, and where my regrets come full circle. In the course of our conversation, which started out with me practically to tears, but ended with a bit of schadenfreude over who gets this one next semester and how they're going to Kick Her Everloving Ass, my dean mentioned that she wished I had come to her sooner because, having heard the details, it sounded as though this student was harrassing me and would likely have been removed from my class by midterm.

They can do that?!?!?!? Actually, I am thankful that I have a dean who has my back and, though she's no more perfect than I am, she will back me all the way. If memory serves, the words "Bring it on" came up. And, for the record, as much as this little darling scared the everloving shit out of me, I honestly don't believe she would shoot up the campus. She seems more likely to poison my coffee than to go all out ballistic. Had I believed she was dangerous to anybody but me, I would not have hesitated to bring in somebody else. Oh, and the girl could write! Had she been getting grades that reflected her personality rather than her ability, had she not had so much promise as a writer, I definitely would have brought in the dean before I gave her back her paper.

And here's the deal. The little &$%#@#% really did make me a better teacher. I stood up to her and never let her see me sweat (or cry). I dosed up a little smack-down of my own on the last day (sampling: "This is college. This is not high school. This is not GED school. This is COLLEGE, and my job as an English professor is to grade your work, not give you 100% just for turning in some crap. If I did that, your Comp II teachers would eat you for lunch!" -- I mean honestly, 100% just for turning in something that is "close to the topic assigned"???? In Comp I? Are you KIDDING me? Doesn't she know what English classes are for?) I learned not to take this shit from anybody, no matter how hard they are trying to intimidate me (that might work in prison, but this is the real world, sparky!) And I learned that my dean really does have my back, and I really can do this job.

But gawd. How much better might that class have been if I'd just gotten rid of her? And on the days she was absent, it became clear that it really was a wonderful class. There were some losers and a few slugs. But there were some wonderfully gifted students in there, who got the short shaft from me because I ended up teaching the whole class on the defensive from the wall of hate sitting in the front row.