A Morality Tale - In Three Movements.

To: Professor X
From: Trusty TA

Soooo sorry about the message from Snivelling Sick Snowflake that I just sent on to you. What a brat! She seems to have no respect for authority! I have no idea why she felt the need to write all of that to me. It made me sooo mad, especially the part about discrimination! Let me know if there's anything I can do to help you with this situation!!
+++++++++++++++++
To: Trusty TA
From: Sniveling Sick Snowflake (aka Bratty McBratty) 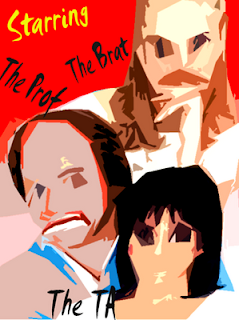 Hi Trusy TA, I went to e-learning and that should be where the grades are supposed to be, but lately the My Grades tab isn't showing.I've attached a photo showing what the screen looks like on my side. Secondly, I've already spoken to [evil instructor] before I wrote to you or dropped the report off in your mailbox. Although she said to you that she'll give me half credit, I will emphasize that she did write in her own syllabus that she'll give full credit to those who have a valid doctor's note and turn the assignment in at least within a week. Unless she has plagiarized that syllabus and made it her own and does not know what her own syllabus is, I suggest she look over it and realize that that is what she wrote as a policy. I can continue taking this argument up with her and the chair and any other [school] policy maker and continue to shorten her vacation or she will fairly grade my report with full credit. I've made it convenient for her to e-mail her about my last missed exam and walked to her office and dropped doctor's notes off in her office. So she takes extra work upon herself to check if the notes are real and continue to accuse me by e-mailing and interrogating why and how I got sick. People get sick. There's no motive behind that. Once again I've given her a valid doctor's note and she can check up on it's validity once more. Unless she wants a written letter from the Pope, I've gotten enough validity to receive full credit. She cannot make up some bullshit about her syllabus or policies or attendance last minute especially if it is an attack singularly on a student like me. I again can take this up with a higher authority due to discrimination. I have a doctor's note, the doctor exists, he did write the note, I was sick, I was present in the doctor's offices, I did call-in sick, and I turned the report in within a week. Therefore there should be no problem in giving me my full credit. She cannot judge me for my illness or absences due to my illnesses. That is unfair treatment and again this can be taken up by a higher authority. I really do hope you give her a copy of this letter since she wants me to go to a T.A. first and she doesn't want to fairly talk to me personally.

To: Bratty
From: Professor X
Brat, Trusty TA just forwarded me your message. You don't think I'm willing to talk to you? An interesting criticism, coming from someone who doesn't have the guts to e-mail her threats to me directly.
And you ought to thank your stars that I 've been letting Trusty TA deal with you so far—if I had been getting your crap in my in-box every day, I would have ripped you a new one by now. Please allow me to explain why.
First, it's interesting you just happened to be terribly, tragically sick at precisely the times when the midterm and a major research paper were due. Yeah, this would be possible. No reason why I should be suspicious about a doctor's note from a city 400 miles away from campus, where you somehow managed to be in the middle of the term, nowhere near any long weekends or other academic holidays. Oh yeah, you said you had to go there because you don't have insurance, so you mom had to come to campus and drive you home to see a doctor there. The free student health clinic here on campus, affiliated with a respected medical school, is apparently not good enough for you.
Well, I was intrigued enough to call the doctor's office to check out your excuse. Weird how the teenybopper who answered the phone knew your name immediately when I mentioned it, but froze up when I asked what dates you were there. She said your charts had been lost. Isn't that convenient?
I've never been to a doctor's office where the schedule book wasn't right by the phone in the front office. Either you travelled 400 miles to visit the world's worst-run doctor's office, or you need to prep your friends a little better when they're covering for you.
Still, I gave you the benefit of a doubt and let you take the midterm three weeks after everyone else, and you surprised me by actuallty passing it, albeit by a narrow margin.
I thought that after this, you might actually get your act together, and in your own special way, you did. Your next series of doctor's notes—which you barged into my office unannounced to give me—were from the student health clinic on campus, whose existence you must have just discovered. You were there two days before the final paper was due, and got a note from them three days after the paper was due.
Trusty TA points out that the student health clinic is within walking distance of our department—if you were well enough to get there on Wednesday (even in subpar condition) you were certainly well enough to drop your paper by our offices on Friday when it was due. Or at the very least, well enough to e-mail one of us to let us know what your situation was. But no. Instead you come waltzing into my office a week later with your Leona Helmsley-level of entitlement, telling (not asking) me that I had to give your unexcused late paper full credit. And of course you're doing ME a huge favor and doing ALL THIS EXTRA WORK by blowing into my office and telling me how to do my job!
And I love how you're threatening to take away my vacation time (I don't get any, honey) if I don't give you full credit. And how you're going to complain to my chair and anyone else in authority that I'm discriminating against you. I'm sure the three other students from your put-upon minority group who are pulling straight-As in my other classes—and who are planning on taking classes with me next term too—would find this claim highly entertaining.
Oh yes, I've talked to my department chair about this. I actually mentioned you to him a few months ago, just after the midtern incident, so he knows your story. And would be delighted to talk to you.
And just so you know, the last student who was brought before out chair for academic misconduct was arrested and expelled for making threats and disturbing the peace. The chair didn't tell me if the arrest was related to the meeting or not. I'm just saying.
So bring it on, Brat. We're waiting for you.