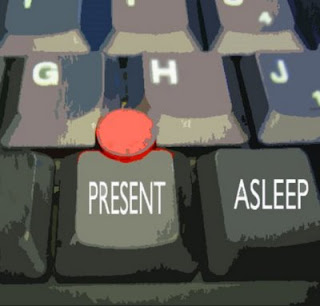 Present Patty, an online student who never participated in one discussion, never did one assignment, and didn't take a single exam. When I dropped her at midterm, she wanted to know why, so I responded that she was not participating in the course. She responded, "But I've logged in each week and pressed the 'click here for attendance' button." I've apparently been teaching finger aerobics and didn't know it.

Hard to Remember Rodney, who claimed that he was failing my course due to a "short term memory" disability that made it difficult for him to remember and recall things on an exam, especially since mine were so hard. If I really cared about my students, I would make my questions easier and not require so much "memory skill." Well, howdy doody buddy. I support accommodations for learning disabilities, but this is ridiculous. I hate to break it to you, Einstein, but years ago, your problem wasn't called a "short term memory disability," it was called STUPID.

Gail with the Gall, who missed the final exam because she didn't pay attention to the syllabus or the gazillion announcements in class as to when it was. When she came begging to make it up, I reminded her that the syllabus indicates YOU CANNOT MISS THE FINAL EXAM. The little snot filed a grade complaint, which was later denied and her grade kept the same as I had given it. But here's the kicker---a few weeks later she came to me because she couldn't get into one of my higher-level classes since she had not passed my introductory course....would I be willing to waive the prerequisite for her? Um, I would rather stick a fork in my eye. In my other one too.

Bitsy Bladder, who came into class 15 minutes late every day, only to get up to "use the restroom" 15 minutes after that, and then leave 10 minutes early. I'd like to think that her skin-tight-camel-toe-creating jeans were pressing on her bladder and thus causing her to have bathroom issues, but it's more likely they were just cutting off oxygen to her already atrophied brain.

Gordon-Needs-A-Guide, who called me in my office 10 minutes after the final exam ended to leave a loud and rude message on my voicemail that said, "Your study guide was bogus. You had stuff on there that wasn't on the exam, and stuff on the exam that wasn't on the study guide. That's not fair! That's not how study guides are supposed to work!!!" Thanks to you dipshit, I will no longer be giving out study guides. Hope your friends kick your ass when I mention this in class.
Heartbroken Hattie, who found a way to relate every single topic covered in class to her loser ex-boyfriend. The sheer number of eyes rolling every time she opened her mouth almost made me motion sick.

Ralphing Rita, who missed the last 3 weeks of the semester due to "drinking too much" and then called the day before the final exam, asking if I would reserve a classroom and teach her everything she missed. Rita, if I did that, I would be the one with the drinking problem.

And finally, Ludditic Lisa, an online student who emailed me 3 weeks into the semester and said, "I'm not sure I'm getting this online class thing. I'm not very good with computers. I don't even have one."