Leslie from Larkspur Offers Some Old School Smack, Some of Which We Don't Even Understand! 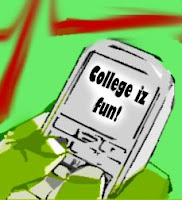 Mighty Mary: I'm sorry that you lost two points on the test because you put the wrong answer. Really I am. It just doesn't matter to me that you have the wrong answer written in your notes from my lecture. You took poor notes. Oh, your best friend wrote the same wrong answer in her notes? Well damn, I guess the other 311

students in the room must have misheard me when they wrote down the right answer during my exam review AND been unable to read the giant chart projected on the screen (which has been posted on blackboard since the first day of class). What was that you muttered while walking away? "What's the point of coming to her if she doesn't know what she's talking about?" You're right. Get out of my face.

Stalking Sarah: I'm on to you. It is not a coincidence that no matter where on campus I go you just happen to sit at a table near me. When speaking with friends, I just love that you interrupt every few minutes with the same question. "Is a refrigerator a type of fridge?" No, Sarah a refrigerator and a fridge are the same thing. "Okay, I get it." Four minutes pass. "So a fridge is a type of refrigerator?" No, Sarah. The two words are synonyms. "Okay, okay. I get it." Lather, rinse, repeat.

While we're on the subject, I absolutely adore that you have started asking my friends where I am when you see them on campus. That's not creepy at all.

Facebook Franny: Maybe I wasn't clear enough in the blackboard document titled "My Policies" in the folder titled "Things you need to know." I respond to most emails but there are several types of emails to which I will not respond. 1) Do not email me to get the notes from class. First, I don't give a damn why you missed class. Second, my chapter reviews are posted on blackboard. As stated in the aforementioned My Policies document, these chapter reviews are the course notes. 2) Do not email me to ask me when the test or quiz is. This information is stated in class. Not only would you know this if you were in class, but if you ever checked this mystical blackboard you would see that I post this information as soon as it is announced in class. 3) Do not email me to ask me what chapters are on said quizzes or tests. Again, come to fucking class. Again, check the fucking website. When you realize that I haven't responded to one of these emails, the appropriate response is absolutely not to continue emailing me (up to ten times in eight hours on a Sunday) the exact same question. While you're looking at the My Policies document, you might also like to check my facebook friending policy which is very clearly stated. I know that you and Dr. Parties-with-Students are facebook friends and this is your primary means of conversation with him. I don't friend current students. Period. When I haven't responded to your ten emails, you next move should absolutely not be sending me several private facebook messages. And then trying to add me as a friend. Based on the contents of my inbox, I think you've finally figured this out. I'm sure the rest of your classmates really appreciate that you've now switched to the mass email as a solution to your confusion.

"Renaissance" Rita: I'm embarrassed for you. You feel the need to shout loudly in the middle of a 300-person lecture that you "don't get Renaissance." First, the word is resonance

. The professor has had to tell you (still in front of 300 people) that he cannot teach to the bottom of the class. I'm sorry that on another day you didn't understand that what the professor meant when he said that because there was less than two minutes left of class he would show the class a new reaction that he would teach for real the next day. I'm sure he's sorry that when you demanded that he "draw the arrows" he had to explain to you that that's what he meant when he said he'd teach the full reaction the next class and that you felt the need to stand up and call him an asshole. I'm sorry that when you asked me whether to withdraw from the course I had the nerve to first ask you your test grades so that I could accurately assess how you were doing in the class. This clearly put you off and informing you that your test average in the fifties meant that you were failing didn't seem to help. Your response of "I don't believe in withdrawing" made a lot of sense, as clearly I'm the one who approached you and told you that you had to withdraw. Oh, wait. That's backwards. More than anything, I'm sorry that I had to call campus security to remove you from class. I really should have more patience. I (and all of your classmates) should have just sat there while you repeatedly shouted "you're lying." It's not like I calmly stated that you had thirty seconds to stop before I asked you to leave. And then calmly stated that you needed to leave. And then calmly stated that if you didn't leave I would call security (at which point you did stop screaming "you're lying" but switched over to "you don't have the right to ask me to leave. Call security. They'll arrest you. My tuition pays your salary). I'm sorry that the police still removed you when you informed them that I was "stupid and didn't have the right to ask [you] to leave." I'm sorry I couldn't spare you the embarrassment of having the entire class hear you shouting at the police in the hallway while I tried to continue teaching. Oh, and I'm sorry that during my more relaxed study groups in the library other students have the nerve to speak. You show up, sit twenty feet away from the rest of the group, and sit down at the table of strangers without so much as an "is this seat taken?" I'm sorry these strangers have the nerve to discuss whatever it is they were doing before you got there, since you feel the need to scold them for speaking because you can't hear me. While we're here, I might as well apologize on the behalf of others. I'm sorry on behalf of your gen ed professor who had you removed by security last semester; his doing that sure did hurt your credibility with campus police

when you told them that no one had ever had a problem with you before. I'm sorry on behalf of the classmates who all call you "Renaissance Girl" and have been sending me emails since August asking me if you could be removed from the class; I'm sure that's hurtful.