Dana From Decatur. "I Got 99 Problems, But Your Paper Ain't One." 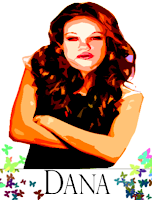 Hey there, kids! How the hell are ya’ll doing this fabulous final week? Those papers coming along nicely

? No? Well whaddya know? It turns out you should actually have been, like, listening all term after all, huh? Maybe you could have, I don’t know, taken some notes, made use of office hours, actually tried on one of the previous papers? Or maybe if you had just made eye contact with me at some point—that would have been a start? I guess all that texty-tweeter-totting

didn’t get you as far as you’d hoped when it came to understanding analytical writing. Weird. It is as if you have all of a sudden realized that this paper needs to be over 140 characters, and can’t use ‘u’ or ‘lol’ as part of that count. OMG!! 911!!!

See, the thing is, I feel for ya’ll—I mean, not really, since I can’t seem to master the whole “lack of knowledge + apathy = entitled brat” equation—but anyway, what I’m saying is, I hear you. I hear you—but I’m done. It’s over, bitches. It’s exam week. You’ve been taught, schooled, learned up real good. I’m out. Yeah, I see your emails. They’re really adorable with all the ?????? and !!!!!!!!!!! But you know what? It’s the first time I’ve seen anything resembling concern—scratch that--consciousness from most of you all term. I could respond, but sending “Dear You, You’re fucked” just seems a tad mean at this point.

So, please, act like I’m not here. I don’t want to answer your question about “how do I do that thing that you already explained five times during the semester???” (Answer: you’re a dumbass.) I don’t want to hear about how you “forgot” how to access the research databases, and by the way you think you need to change your topic (oh, that sounds really promising). I just want to sit over here in my silence, sipping on some sangria

, waiting for those stellar essays to slide on in, and trying to forget the giant suck-hole that was your slack-jawed class this semester.

And then, come week’s end, it will just be me, the pen, and the page. Ahhh. You know the feeling. It’s like when I handed out evaluations mid-term, and you said “YES!” and lunged for the tiny pencils

. And I’m sure it was fun writing “Teacher is a meany-pants” and “Miss Dana ACCPECTS WAY TO MUCH!!!!” all over the forms (way to make your case there, spelling champ!). But I wonder, kids. Did all that bitching make your writing/critical thinking one bit better? Based on the general sense of panic, I’m guessing not. I suppose we shall see. But in the meantime, consider this my outgoing message: “If you’re having paper problems I feel bad for you, son; I got ninety-nine problems but your paper ain’t one. Peace.”