Really Helpful Roger From Rover On the "New" Grades!


In keeping with ongoing budget crises in numerous states that have led to drastic budget cuts, I say we revise our grading system to encourage retention and to thereby generate more tuition revenue. My newly proposed grading system would replace abstract letter grades with motivational phrases that would encourage the students to feel good about themselves and inspire them to remain enrolled.

The new grades would be: 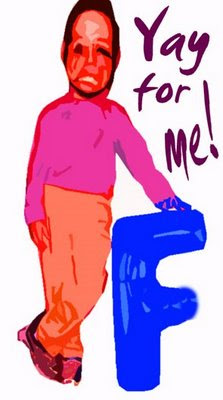 "Super Awesome!" = A passing grade demonstrating that the student has attended almost all classes and turned in all work, most of which is coherent. (Equivalent to current A or B)

"Great Job!" = A passing grade demonstrating that the student has attended most of the classes and turned in most of the work, some of which is coherent. (Equivalent to current C or D)

"Good Effort!" = A passing grade demonstrating that the student has attended some classes and turned in some work and even spelled some things correctly. (Equivalent to the current F)

"I Know You'll Do Better Next Time!" = A failing grade demonstrating that the student has signed up for the course but never attended nor turned in any work. (Equivalent to the current WF, or “Withdrew Failing,” offered by some institutions: to be given only after providing documentary proof via monitoring a semester's worth of security camera footage that shows definitively that the student never actually entered the classroom building; grade can be overruled in appeals process via letter from student's mother, in which case student will receive a revised "Good Effort!" grade).

This newly proposed grading system will be already familiar to our students, as it is similar to the one they have experienced from K-12. I predict it will be widely embraced and will lead to a nationwide increase in retention and customer satisfaction. And we in higher education will no longer be considered pariahs by our state legislators. When asked about the state of education in America, we’ll be able to answer with a big thumbs up: Super awesome!