Alton from Apollo Beach Didn't Like School Either. Get Your Academic Passion On the Roof, Or in the Trees. 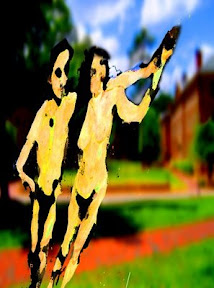 College was mostly irrelevant to my life. My parent’s business was failing. My brother was being taken to some lame ass boot camp in New England. I wanted to get laid. I had no interest in classes. Classes were stupid. Useless. I would go because there was generally attendance.

HOWEVER – at the same time, I was running the college newspaper and the college radio station. Unlike classes that didn’t ask anything of me but memorization, this is where I could put my hand to something. Doing something. Accomplishing something I could be proud of.

Then I found my passion. That didn’t happen in class either. My friends and I would travel to upstate New York and sit on the roof of our professor’s barn, smoke cigs, look at the stars and discuss Shakespeare and Kierkegaard and Eraserhead and “Shadows in the Rain” by The Police. That’s where my “academic” passion started. There was a party once where we all dropped acid and started writing in a notebook, replying to each other’s entries. Sure, the next day none of those entries made any sense, if they were legible. But the questions posed, the pseudo-answers, the insanity of that writing: that turned me on. My friends and I would hike at Stokes National Forest, drink wine and talk, about Dash Hammett and The Cure and Kafka. That was where the real learning happened. That's how I ended up with a BA in Philosophy. And although I took classes – I never really liked classes. Who the hell wants to end a great discussion on Dostoevsky’s The Idiot just because 50 minutes are up?

I didn’t like school when I was in school either. I found most of it boring as fuck, until I found what I wanted to be interested in. And that's the key. Most student don't have any idea why they are in college. They have no idea what they think is interesting. They have no idea what could turn them on. Why? Because a four year degree is just another hoop to jump through, another hurdle, another thing to get out of the way, so they can get their "American Dream Job" making $200K.