I got word the other day that a student of mine, let's call her Natalie, died in a car wreck some miles from campus.

She was a darling, sweet girl, who was among my very best students. In my briefcase at this moment is a project she did in my class. There's an A- on it, and some scribbles of mine. I thought it had everything except maybe a bit of ambition.

It seems so silly now to think about that part of things. 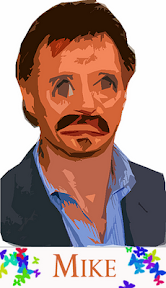 I've never had a student die during the semester, though I know it happens. And the feelings I have about it are conflicted and confusing. It throws my class in such a dim little shadow. What was her work for? Why did she sweat out that mid-term exam? What good has it done now?

I keep thinking, what was the last thing she said in class? What did I say to her the last time I saw her. I never knew Natalie, never saw her outside of my class except for maybe one office visit to pick up a packet of readings or some such.

And I don't know her family or friends. She didn't hang with anyone in class - that I was aware of. I only know from the newspaper report that she lived off campus with her mother and a younger brother. I wonder about them, how they're doing.

Natalie wasn't one of those students who sometimes stick around after class to talk. She did her work. She was pleasant in class. She answered questions and seemed sharp and bright.

I don't know the details of her life. I know more about the car wreck that ended it.

And when a student mentioned her death in class, there was an odd feeling in the room. Not a mourning or anything like that. Not disinterest. Just quiet and reflective awkwardness. I looked down at my notes for class. I thought about some instructions I wanted to give for the final exam. I thought that I was the adult in class, and that it was my job to say something.

I didn't. I muttered something about "tragedy," and I dismissed them. I told them I'd post my notes for the day on the class blog. Most of them left quietly. One student stayed and asked about extra-credit since he'd missed two of the major projects. His question struck me as intrusive, and I told him I'd see him the next day.

I haven't talked to anyone on campus about Natalie. My colleagues didn't seem to know her; she wasn't a major. There's a picture of her on the college's website. She's smiling.

I'm not ready for the end of this semester. I got behind in a couple of classes. My grading is stacked up on my desk. I have finals to give next week, and then a month off where I had planned to put my feet up on a new teak table on my deck. I was going to sit there and drink and wait for the new semester to come around, the new beginning that has always been such a delicious part of my job as a professor.

But I can't get Natalie off of my mind.