Paul from Providence on Student Athletes and Cheating.


Forgive me if I tread a bit lightly on this subject, but I've had a bit of a history with yesterday's question, and that history ended up hurting some good people.

I was a second year English instructor at Football U when three senior football players registered and showed up for the first week of my freshman composition class. They sat in the back, were polite, and then disappeared. At the time the departmental policy was for instructor-initiated drops after students had missed 3 consecutive weeks of any course. When I didn't see the players again, I dropped them all. 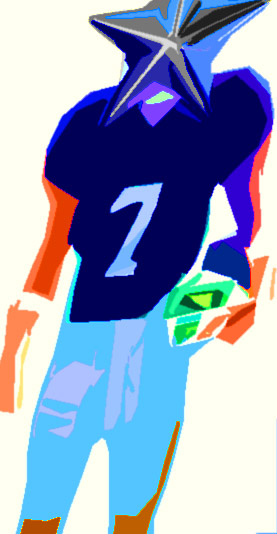 Two weeks later a drop/add form (adding all three back into my section) came to me through the Dean's office, signed by someone I would later find out was the athletic department's liaison. I called my chair who turned me over to the liaison herself and I asked what was up. Shortly after our abbreviated phone call, she arrived in my office. She was pretty, well-spoken, but quite adamant that the students be let back in. "I can assure you," she said, "the boys are all doing their work. You know, of course, that they can't attend class like other students, right? They travel, they work out; they have responsibilities our other students couldn't possible handle." When I tried to interrupt, she said, "I can assure you that it's all above board. I supervise the tutors in our athletic department, and perhaps someone's been remiss about keeping you in the loop." She shook my hand pleasantly and by about the time I'd sat down my phone was ringing.

It was the Dean. He said, "I hope Miss BLANK has been to see you...ummmm...goood. Yes, then I'm sure she's explained everything. Mr. Frankie, or should I say Dr. Frankie, there is nothing to worry about. All of our athletes - especially the poor football guys in the fall! - are just run ragged. Miss BLANK and I have talked about things and she tells me that something fell through the cracks. Although the boys haven't been in class, I know that they've got their work and you'll have it soon. I hope you'll understand."

And I didn't. But the work did show up the next morning, 6 essays, two for each student, all at a reasonably competent level.

I was 27 years old, okay? I was a little intimidated in my first job. I was also, I have to admit, quite the football fan. Our team at the time was one of the absolute powerhouses in the country, Sports Illustrated covers, national network coverage of most games. And I liked that. I liked that someone in my class was mopping up quarterbacks on Saturday afternoons. I told everyone I knew about it.

My chair came by one day in October and closed the door. "Have you been getting material from the players in your class?"

I pulled a folder out of my cabinet and gave him the stack.

"I need these for the afternoon; would that be a problem?"

I shook my head dumbly and then sat down.

The chair didn't come back that afternoon. I didn't see him until the next day, and he simply came into my office, handed me the papers, and said, "Sorry to have taken these. I don't know what I was doing. Just forget it."

The semester ended, the football players showed up in my classroom on the last day - on their way to a New Year's Day bowl game - and turned in their final papers. They all smiled at me and shook my hands. The students in class were buzzing. And then they were gone.

In mid January, just before the spring semester started, the chair called me up at home, an unusual situation. He said, "I'm saying goodbye," he said. "I've got a nice opportunity to take a fellowship elsewhere." It was a short call, and I didn't understand why it was made until the spring classes started.

My next door neighbor, a senior colleague, someone who'd been at Football U for more than 20 years, came into my office amidst the normal early semester flurry and shut the door. "Hell of a thing," he said.

"What happened?" I asked.

And my colleague told the tale. The chair, who'd become convinced that the athletic department had been sanctioning wide spread cheating in a variety of departments without any interference by administration, had gathered evidence of the cheating, a series of identical papers that had been turned in for multiple years by multiple players within the English department.

When the chair went to the Dean's office, he got shuttled around a bit until he was in the VPAA's office with the vice president, the athletic department liaison, and Football U's coach. It was an unpleasant meeting, according to my colleague - whose allegiance I still couldn't guess. "They gave him the bum's rush," my colleague said. "He realized that they had a lot more ammunition for this kind of battle than just a few photocopies of some English 101 essays."

"He found his own way off campus," my colleague said. "But they were willing to help him."

My colleague got to the door and then turned back. With a big smile he said, "Hey, did you see the boys beat the hell out of BLANK in the BLANK Bowl? Fucking 'eh!"

The next fall I faced the same situation. Four students, all kind to me, all professional. They appeared and then disappeared. When the three weeks had passed I sent in the drop/add slip. A week later the liaison was in my office. "I don't get it," she said. "I thought I'd explained the tremendous pressures our boys face."

When she left I turned another drop slip in and I waited.

Sometime in November I was walking across campus and my next door colleague saw me and waved me over to a bench where he was sitting.

"I've got your students, you know. They just transferred them to my class. What good do you think you're doing dropping them. I thought you understood it. [The chair] is not the first one they've run off, and he won't be the last. They're going to find a class for them somewhere, you know? If not yours, then mine, or someone else's."

I turned on my heel and went back to my office. I kept my head down for another year and then found a teaching gig at a decidedly un-football school in the northeast.

A year after that the former chair (with the aid of a half dozen faculty in different departments across the campus) took their grievances to local and regional media. Football U responded initially with a "sour grapes" defense, but then when it failed to gain traction, fired the liaison, a junior member of the athletic department, an assistant coach, and threw 9 current players off the football squad.

That was enough for Football U and Football town. The press died out and the story went away.
Every weekend in the fall I still watch football. I had an NFL game on a couple of weeks ago. There on the field was a familiar name and face, one of the first three football players I had in my class that day all those years ago. He's an All Pro. They interviewed him coming out of the tunnel for the second half. He smiled at the camera, said hi to his babies at home, and on the second play of the second half, he careened through the offensive line and dropped the quarterback to the turf like a rag doll.
Note: We want to note that, with Paul's assistance, some pertinent details of his story were anonymized.