Bothered Belinda From Boonton On When and When Not To Vibrate.


Let me lay it out for you. I have to do this methodically or you wouldn't believe me.

Gradflake Sharon is probably around 40. Our first class, her cell phone rings, loudly. She turns it off. Wait...let me back track. It rings, and this is a pretty accurate estimate, about 10 times before she digs it out of her bag, looks at the screen intently reading who it that is calling her, and then turns it off. Or so we thought. 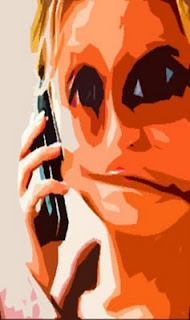 After the class break, it goes off again. Same routine. We now discover that if it rings long enough, and the caller decides to leave a voicemail, the phone proceeds to another, different, Hawaiian ringtone designed to indicate a message waiting. We giggle a little, nervously, tense, wondering whether the professor will say something, but he doesn’t. Some look uncomfortably at their hands, some stare at the board, some (me) stare directly at her, and she does it again – dig out of bag, silence, place back in mysterious realm of bag.

Some of us have decided to complain about her to our spouses and family members. Poor them.

By the time it happens again in the third class, we are now complaining about it amongst ourselves when Sharon’s not around.

Sharon has a habit of talking without being asked, and when she does, she pauses dramatically as if she has something ground shattering to say, takes her glasses off, places them on the table, and proceeds us to drape us with the pearls of her wisdom. She is annoying as shit.

Every class now starts with all of us tense. I am tense. All I can think about is her goddam phone, because it rings EVERY class, AT LEAST twice. This bitch does not seem to have a clue. This is grad school. We are disoriented by the fact that apparently, there IS a student type that still needs a spelled-out, policy-ridden, pointed syllabus to tell them that there are no cell phones allowed in class, particularly ones that have a volume level capability of a LOUD AS FUCK. Not loud, not level 8…Loud. As. Fuck.

Finally Dr Bewildered-by-completely-retarded-gradflake says, “Sharon, will you please turn that thing OFF?” But he says it quietly, and Sharon has the social observation ability of half a teaspoon of gravel, so I guess she didn’t see his real and obvious anger.

I knew that it would go off in the next class.

Next class, I whisper in what I take to be a congenial tone, “hey Sharon, did you remember to turn your cell off?”

“I turned it on silent,” she says wryly, as if she is in on some great joke with me. Oh, that silly ol’ phone, always goin’ off at the wrong moment. Bitch.

FellowStudent Paul says it too, in a friendly but meaningful way: “Hey Sharon, turning that phone off today?”

“Oh yes,” she say, “turned it on vibrate…just couldn’t bring myself to leave it in the car.” LOL ROTFL o ur so funy.

An hour and a half later, that familiar tone sounds again. Her unmistakable ringtone. The best part? As our stimulating class conversation comes to an abrupt halt, she looks at poor Sally next to her, as if it were HER phone. Sharon, you’re the only ass in this class who doesn’t know how to use your fucking cell phone, as made clear but the repeated “power up” and “power down” sounds you make during class every fucking day (oh yeah, did I mention she does that too? Power the fuck down and keep it that way).

Paul: “That ain’t no vibrate.”

Dr Bewildered, it is clear (to the rest of us) is incensed. He can’t even find his train of thought to restart the discussion. And Gradflake fucking Sharon looks around for a moment before finally digging her phone out, turning the damn thing off, all the while swearing righteously that she turned it on vibrate, oh yes, she swears she did, she doesn’t know HOW this happened…and then, a grudging “sorry.”

Dr B: “Well. Next time, you have to turn it off.” I guess living at her level of oblivion would be kinda nice: she had no clue how incredibly angry he was.

The rest of class, all she did was argue rudely and offensively with anything any of us brought up in class. Talk about projection.

Today, her cell went off again. When will us pussies gather enough strength to tell her to shut the damn thing the fuck OFF our leave class. Maybe next class. Maybe.