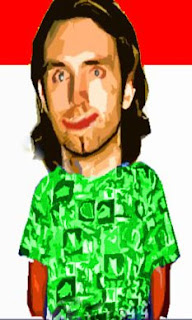 Look, everyone loves Compound Cash. He's just one lovable tokin' motherfucker. But the truth is he's gone and he swears he's not coming back. The "cult of Cash" we call it around here, because the page seemed to be as much about him as any damn snowflake you've ever had in a class. (And, he rarely showered, so all the couches and chairs smell like Matthew McConaughey.)

He single-handedly ruined the summer by posting 3 or 4 times more material than has been typical. That created an expectation in our readership, and then when he tired of the work, he split for a cabin or a mudhut or a hookah, and now we've got to explain that hiatus is REALLY starting today, and will continue until our full return on September 1.

It's important to note, however, that June and July 2009 were our biggest summer months ever, hitwise. That's terrific, and we're glad folks had a good time. But Cash got tired of the job because he read so much and did the page on his own every day over the first part of the summer. We who've been around here, know that it wears on you more than you imagine. Cash, in fact, admitted to us that the negative email that comes in just sapped his groovy vibe. (He didn't say "harshed my mellow," but that's what it sounded like.)

RYS is usually fun, but man, you have to have your head in the right space. You have to NOT care when writers write in every day telling you what a terrific asshole you are, and how come you don't like students, and it happens every day, scores of these things. And it wears at times because so many folks write us at the worst moment of the day! When do you seek RYS? When you've just realized what a soul-crusher the career is, right? And have you ever had a pissed-off colleague bend your ear? Well we get a lot of that. (And we love to provide the service, but it does make us reach for the Scotch a little more than is reasonable.)

We do, of course, get lots of positive emails and today's note is not a plea for more of that. We do the page because it's 78% fun and 22% misery. And we share the load among a number of moderators because it can get old in a real hurry. Cash would have made it had he taken it easy over the summer, perhaps a couple of days a week. But he got a kick out of it, got involved with an extraordinary amount of outside-the-page correspondence with RYS readers (seriously, he's gone, so you can send to his real email address if you have it), and burned out. It's silly, we know. But we all do it for free, and there are just times when you don't want to read 200 emails.

So, no worries. Cash WAS a cool guy, and we're glad to have met him (in the virtual compound sort of way), but it was more work than he imagined, and he was pretty clear about not wanting to do it any longer. We do have 2 new folks who are going to try out some short-term moderator spots for us starting Sept 1, and their absolutely nutty "compound" names will be revealed soon. (Though nothing will ever top Wicked Walt's facetious 'Compound Cankersore.')
Anyway, because Cash was quite the character, here are some of his best moments from the summer: