Who's To Blame; Who Suffers? Toni From Twin Falls Sends Us A Story To Ponder. 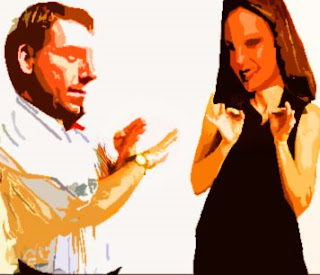 I taught at an open-enrollment university in the South for 3 years. In my last year there, I had a deaf student, one who arrived in U.S. History 101 the first day with the standard form from Disabled Student Services saying she needed a sign-language translator and extra time for assignments and exams -- no problem.

Well, actually, big problem. Because she needed so much extra time for assignments and kept giving me excuses for turning them in even later than her allotted extra-time, I never actually got an assignment from her until a day or so before their first ESSAY exam. Oh boy -- I could not believe my eyes. She was practically illiterate! I am not exaggerating when I say that she handed in a short writing assignment with sentences like "Man colonist tree England ship America." It was utterly incomprehensible.

I have had deaf (and blind) students in class before who were perfectly capable of putting together a coherent thought.

I bled all over her assignment and wrote in my comments that there would be no way for her to pass the essay exams and I did not know what to do (make a whole different objective test just for her? that seemed unfair to the other students) but that she should probably drop the course. The next thing I know I get hauled into my chair's office who tells me that her father has complained and threatened to file an ADA complaint against me.

My chair said she had been an excellent student in high school and had done well in her other intro classes at our institution (someone at the university gave her an A for English 101!) I then produced the assignment in question and my Chair practically fell backwards in his chair when he saw it. I said, "Clearly this kid has more going on than deafness." Then he says, "Well, according to her father she does have some slight learning disabilities."

SLIGHT? "Well, I was not informed, and, as you can see -- she's illiterate. This kid's been patted on the head and socially promoted for 13 years -- but not by me. How can I pass her? How can she possibly take and pass an essay test?" My chair sympathized, intervened with the father and all went by the board. The kid dropped and I never heard anymore about it.

But, I wondered -- who would do this to someone? She has no hope of making it on her own in the outside world if she can't even put a coherent sentence together.