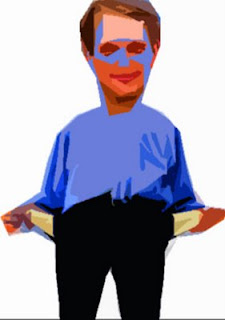 Ah, grad student poverty. One of my favorite topics.

When I was a member of my school's grad student government, we tried a passive-aggressive tactic to impress upon the Deans the inadequacy of graduate stipends. At the time--and this was just a couple years ago--the "University-Stated Minimum" was $12,000/year, which was just $100/month too high for grad students to qualify for food stamps and welfare.

However, the term "Minimum" was misleading. It merely meant "the minimum that any NEW grad student could be paid." Existing grad students were allowed to retain the unraised stipends they started out with, some as low as $8000/year. These students did qualify for food stamps and welfare.

So a grad student government posse approached a dean and said, "Could you help show us how to get on welfare? A lot of grad students qualify." We hoped the dean would be outraged that grad students at this fine institution were being paid so poorly (when our University President was making $1.6 million/year, the highest salary of any University President in the country--oops, hope I didn't destroy my anonymity). Instead, the dean brightened and said, "Sure! We can set up a website with links to information about welfare and food stamps. No problem!"

I was fortunate enough to be in the sciences, making enough to barely live on. I don't know how the Anthro grad students lived on $8000/year, but I do know why they took a decade to graduate. Gotta get a part-time job or two. Either that, or live in a box.