Scranton Suzanne Offers Advice to Nila. A Response For Those Suffering With a Male Student Egomaniac. 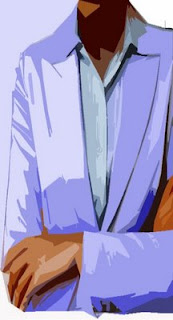 I don't know what your field is, but I urge you to, among other things, take a look at some of the social psychology research on the intersections of race, gender, appearance, etc and college professing. It's well documented that (tall) apparently white, apparently hetero men speaking unaccented English embody many students' image of 'college professor.' It's who they imagine when they're thinking about the role/occupation. Such characters are much more easily accorded respect and authority and the studies show, have to actively do things to lose students' respect and to lose authority. Others - the short, the female, the "of color," the international, those with accented English (but not Anglo-accented English) - start from a one-down position, where we must work to earn authority and respect. We are not seen to embody it automatically just by virtue of who we are. Looking at some of the research on this (see particularly an article by Gabe or Gabriel Smith about faculty of color and syllabi) might give you insights and may encourage you to know you are NOT alone.

So what can we do? First, I always teach in professional dress, which appears to me to be best exemplified by a blazer, slacks, a shoe with a heel, minimal jewelry. I wear makeup because I look a little younger without it. I've found very comfortable shoes that have (non-stiletto) heels - height conveys authority. Slacks convey masculinity in a sense. Costuming is vital.

Second, my syllabus is groaning under its own weight - 8+ pages and growing every year. I've found different ways to convey the idea that I mean business, from Day One. (My students now complete a syllabus contract to attest that they have read and understand everything in the syllabus.) Some of what's in the syllabus: I don't discuss grades on papers, tests, etc until the student has had the grade for at least 24 hrs and I don't discuss them by email, only in person in office hours (e.g., my turf, both of us sitting down). I am direct in the language and have grown terser and terser, eg, "6 absences? You will be withdrawn from the course." It is easier to begin with some seriousness and an all-business attitude and migrate to something more jocular or loose later in the term.

Third, I read teaching and pedagogy guides, books, and websites with frequency; I bone up during breaks and in the summer. They give me techniques and tools for clarity, order, logic, assessment, etc that have become the backbone of my teaching. I have seen that the more order, logic, and organization I have employed, the more student complaints of all sorts have diminished, and the more this kind of sexist (and racist) posturing has decreased. The work on dealing with difficult students has helped me gain insights into their posturing and conduct as well; though they aren't bringing much more than knee-jerk behaviors supported by a stratified culture, I can at least bring an analysis to the situation (and it helps).

Another thing is that, depending on your subject and the other students in the course, chances are that other students see the Egomaniac for what he is. Employ their help in effect. Egomaniac goes on tangent in class discussion and attempts to puff up his insignificant chest? Flip his comment or question to other students. Open it up to the other students. If a student rolls his eyes when EgoBoy hijacks the class, say, 'I just saw a reaction - you had a look on your face - please comment,' and Eye Roller will take some of EgoBoy's energy out of the room by disagreeing.

I have begun to teach critical thinking in such a way that whenever I have a tool like this, I can always go back to critical thinking and say, "What's your evidence for that claim?" Or "where in the reading is the evidence in support of the claim you just made?" Or "That sounds like your point of view." And then I ask the class, "Why is that his point of view and not an evidence-based argument?" Then they help out - because opinions are blah blah, or evidence enables us to.... This goes back to the whole 'logical, ordered, presenting ideas bigger than mine' approach I referenced above.

I have to be honest and say that I rarely (any longer) get the sort of student you describe, mainly because he is not at all drawn to the subjects I teach, so I am a little out of practice in dealing with the Male Student Egomaniac. But I used to get him and his cousins all the time, when I was younger and felt less of my own authority (nothing like earning tenure). They whipped out everything on me: standing while in my office so that he towered over me, clearly a dominance move, complete with pounding on my desk; threatening me with reports to the dean, the chair, the president of the college; email whines and rants; nasty course evals about me being a "feminazi" (highly original); making sexual comments about me to other students, covertly, during class, as a way to demean me and try to put me in my place, and on and on.

The other thing you should do, if you haven't already, is find a faculty mentor (dept or not) whom you can trust. You need to know that someone in power has your back and that they understand the context in which students evaluate, perceive, and judge us. Profs teaching sensitive or controversial courses (or required courses that are seen as drudgery) need to know that context will be factored into upper-level reviews of their work as they progress toward tenure. If I am a Black woman teaching courses on race where half my students are gen ed requirement-fillers, then chances are that I will have negativity based on my students' racism and sexism. It can be hard to parse out sometimes but I know that someone with more power than I have does have my back and will contextualize my student evals based on knowledge of these unfortunate structural and cultural dynamics.