Doug From Daytona And the Shame of a Sundress. 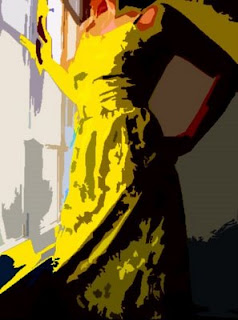 Your recent discussions about classroom / student nudity generated a real uneasy memory for me, and I thought I'd share it with your readers.

I had been teaching for 2 years when I got my first real-live look at a student's bosom. It was a singular moment in my life, but not in the way you'd probably imagine.

I was 28, single, and the idea of scooping up some of the sorority candy for myself was always a temptation. I'd never had the courage or the bad sense to do it, thank goodness, but it was a titillating notion nonetheless.

On final exam day, in what remains a confusing slice of time, the most gorgeous student in my current class came to my office nearly in tears. She'd finished the final earlier, and had realized that she had likely failed. She had struggled all semester, but had sought help from the tutoring center to stay right on the pass/fail line. But the final had convinced her she was overmatched, and her story tumbled out of her: abusive father, disapproving mother, siblings who thought she was a stuck up bitch because she was going to college, dope-smoking friends, and a boyfriend who liked to fuck her sister as much as possible.

It was all delivered through sobs, and it was extremely uncomfortable. I said the normal platitudes about "let's see how the grade comes out," and "I'm not a counselor, but I can call someone at the college," etc.

And then it happened.

She was stunning, and dressed in a flowered sundress that showed off her figure, her tan, and her youth. She reached to one strap of the dress and lowered it, showing me her breasts. All the while she continued to sob. I felt a sickness in the pit of my stomach about the inhuman people who surrounded this young girl who'd somehow created an environment where this sort of behavior was an option. I felt such shame for many earlier thoughts I'd had about this student, other students, really mere girls who were not yet women, not yet real adults. The scene felt perverted, ugly, sick, and I hated myself for having been attracted to her and any other young girls in my classes in my short career.

I stood up quickly, told her to cover herself, dragged a female colleague from down the hallway to join us, and we finished a very brief and awkward conversation about waiting to see the final grades before anything else.

The young girl sat in front of the two of us, sheepish, still crying, and then left. She failed the final and the class. I saw her name on my class roster for the next semester but she never showed.

I never saw her again on campus, and never found out what happened to her.

I've never forgotten her, though, and am grateful to her for the lesson she taught me. A semester doesn't go by that a double of hers - always 18, always in a yellow sundress - doesn't stroll through my field of vision in a classroom or on campus. And I think of her, and hope that she is well.