Shit! If We Can't Blame High School Teachers? What Are We Going to Do? A Longtime Reader Moonlights And Files This Report From the Farm Leagues. 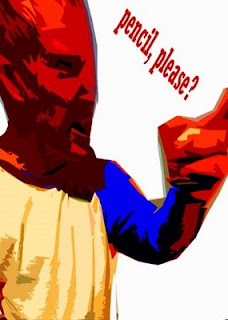 It's so easy to blame HS teachers, but is it really fair? I think blame is to blame. Professors blame parents and teachers. Teachers blame students and parents. Parents blame teachers and little league coaches. Little league coaches blame mommies, liberals and Bobby Bonilla. But few people accept that identifying a scapegoat doesn't actually fix the problem. When flight 1549 hit the geese, did the pilot stop and blame the geese, or did he land the fucking plane without killing anyone?

I'm one of the RYS adjunct outcasts who has to supplement her income with another job. Guess what that is. I teach AP physics. By comparison to what most HS teachers have to deal with, my job is a dream. I've got the cream of the crop, and it's still a difficult job.
It was mid-term week last week and I had to proctor the below-Regents chemistry mid-term concurrently with my class. So while my kids are trying to work out AP physics problems, I spent the entire two hours telling the chem. class "I can't answer that," over and over and over. For instance, "What does 'ionization energy' mean?" "Discerning whether or not you know that is the point of that question, so I really can't tell you." "Huh?" "I can't answer that, go on to something else." "What does 'which of these elements have similar properties?' mean?" "That's the question, you're not asking for clarification, you're asking for the answer. Just do the best you can."
There were only eight kids in that class, but I actually spent two hours fielding requests for the answers. I know their teacher. I know he doesn't give them answers when they take tests, and yet they keep asking for them. Something is happening that can not be blamed on their teacher. I know all of their teachers and we sit in the faculty room shaking our heads. We don't know why this is happening or how to fix it, but we try.

And in case you still don't feel like HS teachers are in the same boat, here's another little excerpt from the saga of the science midterm. The third time I wouldn't give the same pain in the ass the answer to a question, he said "shit" 15 times, a little bit louder each time, just like the Isley Brothers song, rising from his seat at a rate to match the volume, then screamed "I'm not doing this," held his answer booklet to the wall and wrote, "I'M NOT DOING THIS!!!" all over every page until his point broke.
Then he sat back down silently for a minute or so, got up and walked to my desk and said, "I need another answer booklet and a pencil."