Diaper Dave from Dallas Points Out Our Anti-Youth Bias - And Justifies It All At the Same Time! 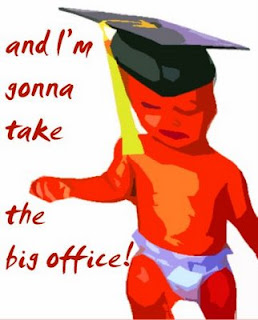 I get so annoyed with the anti-youth movement on this site. I was cheering hard last year that the Gumdrop Unicorns would beat down the annoying Silverbacks last year, and now I see you've doubled up efforts to make fun of younger faculty members with the post yesterday about ten "candidates" and their mistakes. I call bullshit on the whole article, but let me show you where your clear bias reveals you:

Candidate 1: So what, the candidate prioritized teaching somewhere other than #1. I'd bet you he/she was asked to prioritize. Why wouldn't any faculty member give teaching 2nd or 3rd. The younger generation of scholars is ambitious and our own scholarship SHOULD be the priority.
Candidate 3: He's exactly right. Wasting departmental expenses - which could go to faculty for travel instead! - on a student newspaper or magazine is stupidity. You know senior faculty wouldn't have to give up something so little Susie Sophomore could have her anorexia poem in the paper.
Candidate 4: Sure, this candidate could look up the time zone, but I'd bet the question was just an intro into learning more about the area. You'd bitch if the person wasn't interested in the local scene.
Candidate 5: So what. Classes don't make sometimes. That person did have the syllabi for the classes, though, to prove that the effort was made on his part. If admissions or the registrar couldn't fill the class, it's not the faculty member's fault. And that reminds me. How many times did a senior faculty member "not have a class make"? None. That's the number. It happens to the young faculty members all the time.
Candidate 6: Asking about the chair's retirement shows a keen awareness of the professor in question and concern. I can't see how you can spin that negatively.
Candidate 8: Eating at an interview? How scandalous. That you were bothered about it tells me much about you than it does the interviewee. (And I will add that I've done similar, especially when I have as many interviews in a day as I do.)
Candidate 10: Okay, maybe it's bad form to ask for graduate courses now. Better to wait until the ink is dry on the contract. But that shows ambition, and not just sitting around taking what is given. I'd say that's a candidate who's ready to really move up. You don't seem to realize that the upcoming generation of scholars and faculty are very ambitious. We've succeeded throughout school and we want to succeed in our careers. All of what you annoyed you in your post was simple ambition by hungry and talented new members of the professoriate.
It's all perspective, of course, and I think you saw those candidates as young and unschooled (and nor worthy of your MANY years of service), and so you were persuaded to harshly judge their actions without recognizing that a new generation of faculty - the ones now REPLACING YOU - are going to have their own way of doing things.
You might as well get used to it, deadwood, because me and Candidate 10 will likely be your bosses in a couple of years. Spin on that.