Grad Student Greta from Glendale and the Gattaca Gaff.

I'm a Ph.D. student in the social sciences at a great university in California. I also teach a class part-time at a sprawling and multi-campus community college. To supplement my "income," I pick up sub classes at the CC fairly regularly in a variety of disciplines. There's a wiki, in fact, where profs and subs hook up, exchanging needs, assignments, etc.
Last week I took over a Tuesday/Thursday class in Sociology, and a Thursday night class in Philosophy.
For days I tried to pin down Sociology Stan about what he wanted done in his two classes. He had helpfully forwarded me his class schedule which listed "TBA" for both of those days. Uh, okay. Finally on Monday afternoon I got an email from Stan: 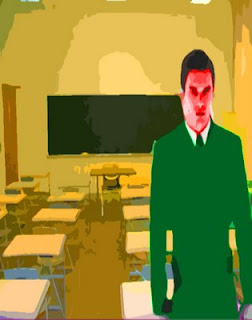 Dear [Not My Name At All]:
Thanks for taking over my class. I'm taking some long-deserved "mental health" time for myself. I'm going to leave a DVD of the movie Gattaca for class this week. Just arrange to have a DVD projector sent to my classroom and show it both days. I think it'll take that much time. Pass out a sign-up sheet and then at the end of the movie ask the students to answer these questions: 1) What sociological questions does the movie raise? 2) How would you answer those questions? Be specific.
So I had 18 hours to find a DVD projector, and then two phone calls to find out where on earth Stan "left" his DVD of the movie. I was able to track everything down and arrived in class Tuesday. I passed out an attendance sheet and showed about an hour of the movie.
I was also having trouble tracking down what I was supposed to do for the 3 1/2 hour Thursday night class I was taking for Philosophy Phil. He was harder to pin down than Stan. After he told me he'd like me to take the class over, I had been unable to get any specifics. I left phone messages, email messages, and got nothing.
Thursday morning I was preparing for the second half of the movie for Stan's Sociology class when I finally got this email from Phil:
Thanks, sub. I really appreciate you helping me out tonight. I've decided to show the movie Gattaca to my class. I'd like you to spend a little time at the start of class talking about the philosophical implications of the movie - as you see them. Then show the film. They'll probably want a break after that. Then at the end of class, engage them in a discussion about the characters in the film and their motivations. What do they think Jude Law finally believes? Thanks.
And that was it.
I went to Stan's class in the afternoon, showed the second half of the movie and passed out a neat sheet with Stan's questions - that I prepared and copied.
I had dinner and then went to Phil's night class. I had made some notes about what implications I thought the movie had, trying to use my recent viewing of the first half of the film and my second most recent viewing of the film (10 years ago) to guide me. At 6:30 nobody had arrived yet. I had the projector set up, had the movie cued, and waited. 6:40. 6:45. 7:00. Nobody.
I went home. Now I wait to see if either Stan or Phil will turn in the necessary paperwork for me to get my $47.50. I'll let you know.