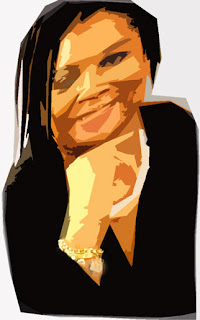 I work as a program director at a small college with a large African-American population. The population is also largely female and somewhat disadvantaged.

After my first year, I started wearing my sorority lanyard. I don’t often wear paraphernalia, but for some reason, I wanted the lanyard (I had to go out of my way to get one. We don't recognize Greek organizations on campus. Although students can join a city-wide chapter.)

Since I’ve been wearing it, I’ve noticed a difference in the way the students view me. It’s almost as if they do a double-take. It’s like all of the stereotypes of Greeks flash in front of their eyes in that nanosecond. Here is an attractive, professional woman who might have a “past.” She might have actually had a few too many drinks in one night, partied her ass off, HAD SEX PRIOR TO MARRIAGE!!!! And she’s a director now. (Ok - to be honest, that all still happens, but I digress!)

And I hope their next thought is, “I can do that, too, someday.”

I now wear it continuously because I feel it enables me to be a role model. I hope it says to the students “Have all the fun you want - because God knows, I did - but don’t forget the real reason why you’re here.” I think it humanizes me. I think it helps students (regardless of whether or not they’re actually in a sorority) see that we academics aren’t just people who tell you what to do. We’re people, period. We have lives (both past and present!)

Maybe it’s because I deal with an "at-risk population," but I do think that we should try to humanize ourselves more to our students, whether it’s through a humorous "life" story in class (relevant to the material - of course), or wearing Greek gear, or having "personality-revealing" junk in the office. I don’t want them to be my friend (never that!) but I want them to know that they are able to achieve what I have achieved. I want them to know that I am not an academic machine, I once had a life (probably more similar to their present life than they might actually think) and look where I am now. You can do that, too.