Do We Have to Wind Their Watches AND Wipe Their Asses? 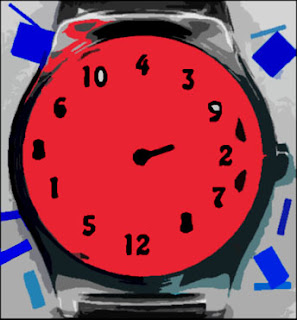 Has anyone else noticed that students are increasingly late to class?
Not just one or two chronic offenders and not just by a couple of minutes. I’ve sort of noticed this trend over the last couple of years, but the whole thing crystallized for me the other day at the beginning of a 2:30 class. I arrived at 2:20 and set up my laptop, hooked it into the projector, arranged the handouts and my roll sheet, then had time to go for a pee before class. I returned and began the class at 2:31 with about a quarter of the thirty-person class missing.
It is early in the semester, so I was going over some logistical bits and pieces and handing stuff out and then taking roll, since I’m still trying to put names and faces together. During the ten minutes or so it took to get all that done, the rest of the class wandered in one or two at a time. Naturally, they had to be given handouts, I needed to mark them present on the roll sheet, and, after class, had to repeat for them the things I had told the class while they were having a last smoke or whatever they were doing instead of coming to class on time.

Several of the students who sauntered in late had a couple of days earlier been begging me to overload them into the class, which was supposed to be capped at twenty-five. Is it just me? Is it just my school? Or have I noticed one more sign that civilization is sliding into the toilet, with my students leading the way?