Who Knew There Was Such Drama In that Big Building At the End of the Quad?

As you know, the library is usually one of the very best places to avoid students and get some work done. Yesterday, however, as it was the end of the semester, many students had dragged their overworked selves to the library. These are the sights and sounds that greeted me, Professor Bean, as I tried to work:
Scene 1 in library, 3rd floor:
Young person, lady parts barely covered with a micro-mini; she also sports shearling boots. She eats Skittles and talks into a pink phone: "I am at the library. I am going to get a book." Pause. "No, this is the best way. Turnitin can't catch you if you use a book."
(Professor Beans wonders at these comments. Students tell her they have no idea that it is wrong to copy, and yet when speaking to friends they speak openly of it and hand out tips for dodging anti-cheating software.)
Scene 2 in library, other side of 3rd floor:
Young person, also female, hair in ponytail as an obvious sign she has been working too hard to groom. She has an entire sack of fast food folded out on the table in front of her; has gotten ketchup on the table and her chin. There is palpable disdain in her voice as she says loudly into her cell phone, also pink: "Gah! Like that's going to happen. Look, I just need you to get here so I can copy your math."
(Oddly, Professor Bean feels slightly better knowing they treat their friends exactly the way they treat her.) 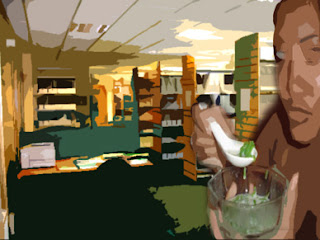 Scene 3 in library, fifth floor:
Two young persons, both male, with what appears to be Korean barbecue in styrofoam containers. Boy howdy, that sure looks good. They are dressed in College gear; one has jeans so dirty Professor Bean thinks of scabies. Between bites of sauced beef, one remarks: "I should have gotten a soda." The other one does not respond as he is scrolling through his cell phone looking at texts and emails and says in return: "This professor is such a douchebag. It sucks we have to stay for his stupid class."
(Wha? Classes just ended yesterday. No finals during finals week? It says in the faculty handbook that professors may not schedule finals before finals week. Professor Bean is confused. Is Professor Bean the douchebag of which the young man speaks? Professor Bean peeks out from the stacks to check to make sure she doesn't know him. She does not. She feels no better knowing she is a douchebag in somebody else's world. The university scheduled her final for Thursday, of all days. Thursday.)
Scene 4, library front desk:
Professor Bean observes many signs that say: "No food or drink" and "Please turn off your cell phones." She wanders down to the person sitting next to the front door. There sits a young man with inexplicable hair and earbuds screwed into the sides of his head. Professor Bean stops before him, obviously wanting his attention. He ignores Professor Bean, staring into his book. He appears to be painting the entire page with yellow highlighter. Professor Bean feels a bond: She always enjoys coloring, too. He gives up and looks her way; Professor Bean smiles encouragingly; he sends Professor Bean a filthy look and grudgingly takes off his earbuds.
Professor Bean: "I see that a lot of people are breaking the rules about food around the library. Is there any way we can get them to clean up and avoid eating in here? The second floor smells like eggrolls."
He rolls his eyes and looks at poor Professor Bean as though as she has a third eye in the middle of her forehead. "It's the end of the semester. Students are busy. They have to eat when they can."
Professor Bean: "But they don't have to eat in here. It's not good for the collection or the common areas. The weather is nice. They can eat outside on benches. They can eat at the union."
He looks at Professor Bean: again, then slides his eyes off to the sides of his head: "Yeah, I'll get right on it."
Scene 5, deep stacks on the 6th floor:
Professor Bean takes her books and notebooks into the stacks, deeper and deeper, up many flights of stairs, to the carrels on the 6th floor, where only graduate students and librarians roam.