We have spent hours here at the RYS compound coming up with funny titles for the post below. We've run through some of the most vile and inhuman things you can imagine, but nothing does the piece justice. We've decided to just let the following note to us from a college professor speak for itself.

I was at a party with about 20 undergrads. I must confess I had more than one drink that evening. For some reason I crave ice cream when under the influence of alcohol. I immediately began my search for someone at the party who also wanted ice cream at one in the morning AND was sober enough to drive to Dairy Queen.

The only person who satisfied both of these conditions was Marisol, a student of mine. Unfortunately, no one else at the party was interested in joining us. I was a little hesitant to go with her without a "chaperone," because in a small town it's possible that we would be seen together and the rumors would begin to fly. But I figured, "What the hell!" 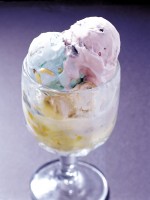 When we arrived at Dairy Queen and exited Marisol's car, Dairy Queen had just locked their doors for the evening. In my frustration I exclaimed, "I want ice cream!" Right as I was saying this a bit too loudly, a crowd of students turned the corner - one of whom was enrolled in another of my classes. The student immediately started whispering to her friends, I assume something along the lines of, "Hey, look. That's my professor!" They all started to giggle. As if that wasn't strange enough, here's what happened next.

I made the suggestion to Marisol that instead of giving up, we could go to the 24-hour grocery store and pick up a pint or two of Ben & Jerry's. Sure enough, after taking two steps into the grocery store we immediately ran into two other female students from Marisol's class. Looks of terror immediately appeared on their faces. I imagine they were thinking, "Oh my god, our professor and a girl from class are going to the grocery store together at 1 AM on a Saturday night... something is very, very wrong with this picture."

What does a professor do in this situation? Hiding behind the stack of soup cans was no longer an option. So my response to their horrified faces was to smile and say, "Hey, you're in our class too! How ya doin' tonight?" They were too shocked to respond. Luckily, no scandalous rumors ever started.

My advice to faculty going to a student party - bring ice cream!