Perry from Pennsauken Goes Old School, And Throws In a Curve There At the End. 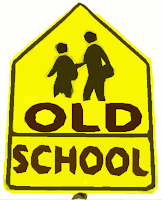 Sad Eyes Solomon did next-to-nothing all quarter. He rarely had a notebook. He often slept in class. He seemed completely disaffected by everything. The he got a laptop and he was furiously typing on it every class. Yeah, probably playing solitaire or Facebooking, or on IM, I am sure. Imagine my shock-- SHOCK I SAY! -- WHEN HE APPEARED, 10 MINUTES LATE, to the mid-term sans writing implement. He begged me for one, but I refused, at which point I got the full-blown puppy-eye treatment. It was like looking into a dying dog's eyes. A classmate generously loaned him a pen, at which point he decided to CLIMB OVER AN ENTIRE ROW of students to take a seat in the middle. Having barely 30 minutes left to take the exam, he started flipping pages; I wondered why he wasn't writing anything on those essays...hmmm. It was actually a quick test (for most of the class), and everyone finished in about 30 minutes, which left Sad Eyes alone for the last 15 minutes of class. The pen-loaner asked for his pen back before he left, so for those last 15 minutes of class, I got to see those sad eyes and frowny pout until I got fed up ... er, I mean Solly finally relented and handed in his half-empty exam. I had warned the class with both a stern oral pronouncement and a note on the board when the exam would be and to BRING THEIR OWN WRITING IMPLEMENT for the 3 class sessions beforehand. Sadly, he wasn;t the only one to forget, but at least the others got there early enough to ask for a pencil

from a classmate BEFORE the exam. I am sure Pouty McPuppy-eyes ran to his coach and told everyone he knew what a horrible, nasty, meanypants I was. I just wanted to smack those sad eyes right out of his head.

Live Streaming Video Vincent was also in that class. He also had his laptop everyday! He never met my eyes once during class. He handed in no papers all quarter. When I showed video segments to provoke class discussion, the lights on his face always screamed "I don't care about my grade!" I tossed him from class, gave him zeroes, gave a midterm warning for possible failure. Nothing mattered. Well, except those videos he was watching everyday during class. I had never encountered anything like that at Slightly Better-known University across town. Maybe he was smarter! I have zero evidence to support that statement though. I wish I could have tossed that laptop right out the window.

Chatty Cathy LOVED having little side discussions with her friends. I asked her to stop, but she couldn't help herself. I heard noise, saw her mouth moving, and immediately jumped to the conclusion it was she who was speaking. HOW DARE I! She wasn't talking at all! Maybe someone had their hand up her shirt and the two of them were just performing their best Wayland and Madame

impression. Yeah, that's gotta be it. I tossed her from class, but I wish I would have made her sit up in front of the class like she was in kindergarten. Maybe she would have cried. That woulda been fun.

Glossary Gus was a super-keener. He was always on time. He always paid attention. He always took notes. He completed two of the three essays (best 3 of 4...see how fair I am!) for the class before most people had done one. Except, well, somehow he never learned what plagiarism is. In both papers, he used expertly worded definitions that smelled way above his ability to craft in prose. A quick look at the textbook's glossary revealed he had lifted them verbatim from the book. Not even a citation or general reference! He ignored the warning against plagiarism

in the assignment instructions. He skipped the warning and listed consequences in the syllabus. No, no. No one had ever told him he couldn't do that! NO ONE. Sadly, I believe him.... I cut him a break and let him re-do one of the papers; he whined and groaned and protested (repeatedly) that he would then have to do FIVE papers for the class. I thought this approach might actually teach him how to avoid plagiarism in the future; I doubt it worked though. I should have just failed him for the entire class just for being an asshole, er...I mean plagiarist.

Then there was A- Alvin. He was the only one to read the 10-page article I asked the class to read. He was usually late, but slinked into class and took the first seat available before he pulled out his notebook and took copious notes. He read the textbook, asked interesting questions, and seemed to take the class seriously. He didn't grub for grades. He got a few middling grades here or there, but he seemed to take them in stride. He was great. I wish half the class could have been half the student he was. Sadly, he had only an A-, so I gave him the grade he actually earned. I wish I had given him an A just for being a good student who OBVIOUSLY stood head and shoulders above the dumbfucks he sat amongst. Damn my sense of fairness and justice!