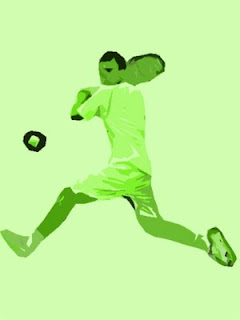 Seriously? These guys need to get off their fucking high horse. I can think of worse travesties.

I'm a graduate student and I take beginning tennis. It's my third term of tennis. I pay $70 per term to learn a bad- ass top spin ground stroke and a killer serve. I play two hours a week in class and maybe another hour a week outside. And I am getting a whole credit each term I take it and I don't bring shit for money into this school. Ten credits over five years?! The travesty! At my school you can take juggling, yoga and ping-pong and get credit.

Yeah, there's problems with athlete-students or student-athletes, though I think we tend to lump these kids into a big category when most student athletes are good students. I've tutored for the athletic dept. With a few exceptions, my students were great. Football season was tough, but these guys were practicing for four hours a day and taking three classes (unfortunately for them, we don't have the football class here) so that I could be entertained on the weekends, so I would buy school apparel to show my spirit, and do my part to keep keep the local bars running. And you know what, they're good kids.
They know everyone hates and loves them. They know we look down on them as dumb jocks but expect them to be the perfect athletes. And let's not forget the reality that a great football program makes easier for our school to attract regular students (you know, the ones we bitch about all the time) who are drunk, stoned and being way less productive than our football players all weekend.

I'm getting a bit tired of the football player (because let's be real... that's who we're all taking about when we trash on student atheltes) being such a whipping boy. Yeah, there's problems, but I don't blame these kids. I blame a system that abuses the shit out of these guys for the financial gain of the top brass at the university (while I make my own pittance) or whomever it is that benefits... because it sure as hell isn't me or the undergrads whose tuition keeps going up. All we get is to replay the moments of people whose physical prowess we could never, ever match. How pathetic is that? I can write a paper engaging with Foucault, and they can throw a forty-yard pass or left over two guys to catch it to save the game. Their way makes thousands of people happy. Mine barely makes me happy. And I'm somehow better than them?
Yeah, the athletics and academics priority is fucked up. But with universities needing to run like a business, welcome to capitalism, baby. This system gives these kids a chance to shine, but they don't entertain us enough, it just spits them back out with nary a 'thank you ma'am'. They are destined, as the last writer put it, to re-live that one amazing play for the rest of their lives while yet again, we look down on them for being a has-been, forgetting how much we have benefited from it.