Even Lab Mice Could Solve This. 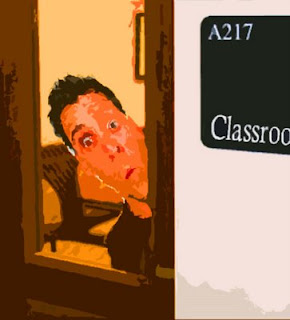 My employer, College of the Liberal Arts in Faculties' Thoughts Only, closed for Columbus Day. A student and I agreed to meet at my office late in the morning.

I arrived early in the morning and noticed scattered cars in the lot. I walked to the building's west entrance, pulled the unlocked door open, and walked in to the mostly vacant building. On my floor, I saw the usual suspects; the untenured, and the procrastinators.

I chatted briefly with a colleague whose office opens to the same short hallway as mine. He mentioned that he would be there all morning and most of the afternoon meeting advisees. I asked him to keep an eye out for my student in case I was out of my office.

A few minutes before the appointed time, I received a phone call from the student, who is an upperclassman and is enrolled my senior level course.

The student was standing outside the building, complaining that the door was locked. It seemed strange because my colleague had a steady stream of students.

I went downstairs, and opened the door for the locked out student, and remarked that security must have locked the doors from when I arrived and when the student arrived.

We met (a conversation that was more surreal than I could have imagined) for about 30 minutes, resolving issues related to the class project.

I left an hour later to get some lunch, before returning to the building. I pulled on the west door, and it opened. I tried the other door. It too opened.

I let it close, and walked to the north entrance and tried both doors. They were both locked.

I tried the east doors. They opened. I then tried the two exterior doors that lead to the respective stairwells. Both opened.

I do not know why security only locked the north doors. I do know that had the student took the fucking initiative, and walked around to either side of the building, the student could have let themselves into the building.

At that moment, I realized that students in this class in particular and in general are not lazy. They don't want to exert the effort. If I gave them all the information, then they would merrily and happily write the fucking report that is worth half their final grade. I cannot expect and should not hold them to the expectation that they will dig for the information unless it is right in front of their fucking faces. That is, I cannot expect them to walk around the building to try the other doors.

Two days later, I talked with an organization that wants an intern from our department. I took some notes, and read through the brief job description. The organization needs an intern who has higher degree of internal motivation. The internship provides a tremendous opportunity for the student who will put forth the effort. I explained to the intern coordinator that I would speak with my colleague about suitable candidates.

What I did not say: none of the students in my senior level class is willing to walk to the other side of the building to see if the door is open. They are nothing more than a bunch of fucking intellectual slobs.