Motor City Mitch On the 9/11 Barrier. 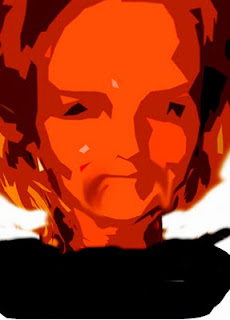 I'm a tenure-track professor at Small Private Midwestern College. I have only been at SPMC for a few years. Some sort of miracle happened and I landed this job straight out of grad school. Because of this, I tend to think I'm not that much older than my students are, and I tend to think that I can relate to them on some level. I'm on Facebook. I blog. I buy my jeans at American Eagle. I know who Lady GaGa is even if I don't have an affinity for the Disco Stick song. The majority of my colleagues cannot say the same. Don't get me wrong -- I do not harbor delusions that my students think I'm cool or that they view me as a peer. I'm just saying that, as one of the youngest profs on campus, I have an easier time relating to the students than a lot of the other profs.

But a ten year age gap can make a lot of difference, too, and that was apparent today. Most of my students were in fifth grade on September 11, 2001. As I sat in my office playing around on Facebook during my lunch hour (give me a break -- it's Friday!), I noticed that many of my peers were posting 9/11-related status updates. I also noticed that none of my students were. I started thinking about why that might be.

My students aren't writing about 9/11 in their Facebook statuses because, to them, it wasn't the day the world changed. They get that 9/11 was scary and bad, but they don't understand the full magnitude of its impact because its shadow is a major contributor to their worldview. Think of it like this: for my students, the Patriot Act is just a fact of life. It's a piece of legislation not unlike other pieces of legislation. They don't understand why I am so shocked and appalled by it -- and I suppose that's because they developed awareness in a country that believed it needed to take drastic measures to protect itself from a dangerous, invisible enemy. I did not.

What I'm really talking about here is frame of reference -- something we've been discussing a lot in my freshman studies/critical thinking course. Your frame of reference dictates how you think and how you behave, determines what you question and what you blindly accept, defines your version of "normal." For me, it's still not normal, for instance, that Muslims are presumed to be terrorists -- and it never will be. For my students, though, it's not an assumption that elicits shock...or even surprise.

And sure, part of it is differences in education levels, in political views, in socioeconomic status, in exposure to diversity, in upbringing and familial values. It would be a gross oversimplification to blame it all on 9/11 (just as it's oversimplifying to say, "All of my freshmen believe in X but not Y"). Still, I do believe that 9/11 is a pretty big barrier between me and my students being able to see eye to eye. At the risk of sounding incredibly trite, the world is a different place now...and from my side of the fence, it's not a better place.