I'm not usually indignant towards what I read at RYS, but you whiners have some warped perspectives on what counts or doesn't count as a "problem student."

Awww, they're texting in class? I have to teach a low-level intro course and I don't like it? My "research" is so important. I need to focus on it so I can get another publication (that no one will read). As for Midcareer Mike, pull it together man! Just cause you end up at a McUniversity in Florida of mediocre repute does not make you a failure - I envy you over the Ivy whiners the most....just soak up some rays, save some jink so you can move about the country a bit, and enjoy those depressed home prices in Florida - oh, and keep the Margaritas flowing.

You guys have no idea. You don't like spoiled snowflakes? You wouldn't last one day at my school. 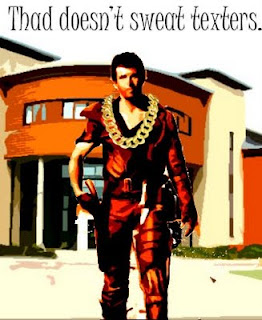 Right now I am sitting next to a man whose arms are bigger than my thighs because he's been working out in the yard at Leavenworth. A female student of mine thought it was a smart idea to blackmail her boyfriend by getting her pregnant girlfriend to pee on the preg test - she suckered him out of 500$ to abort a non-existent fetus. Another student of mine approached me earlier this week - his car was broken down in the lot - he wanted to borrow 500$...I jokingly asked him to give me his gold for collateral (he had none). His wife, sitting next to him, suggested, "just give him one of your kids, you GOT six of em'."

Students selling their bodies on Craiglist while in class? You were joking, right? Well, here a girl of questionable provenance in a class I was subbing for DID put her profile up...on www.sugardaddy.com. She got a offer - 400$ for 2 times a month. From HER GYNECOLOGIST. Oral and "light anal" preferred. Or how about Johnny, who came to class after eating a handful of Xanax and drinking all night; he proceeded to offer up some yellow drool in between stumbling trips to the toilet. You'd probably like Methy McMethster too...she is constantly nagging financial aid to try to get a refund so she can get going on her next bender.

Or the student who pistol whipped his stepfather...maybe the woman who beat hear boyfriend silly with the butt of a shotgun? Maybe you'd like to talk with the homeless student who shows up to the school at 7am when the doors open and doesn't leave til security kicks him out (and sleeps God knows where)...he's surviving on handouts from some of the more generous teachers.

You must think I am exaggerating - I can't make this shit up - if I were that good of a writer, I'd have penned my first thriller and be collecting royalties and sipping Daquiris with Mike down in Florida. When I introduce myself to people I tell them "I work at the school that advertises during Jerry Springer."

At least if I need a hookup I know I can walk down any hallway in the school meet the right student for that....

I'm not trying to whine or talk-up how gutsy (greedy?) I am to go work in the City - sometimes I love it, sometimes I hate it - Just please, get some fucking perspective before you complain about another harmless 18 year old who likes to get his evening plans in order before he leaves class. The job market is tight, you'll earn your filthy lucre anywhere you can, you might just end up at my school - at least texting students will be the least of your worries.