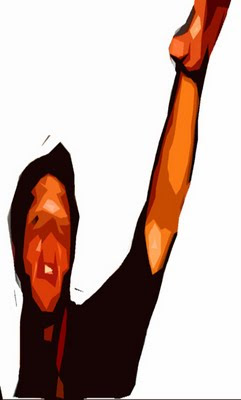 Mid-Career Mike's last post on shifting ambition really caught me by surprise. I hadn't realized how much of my own energy has been spent worrying about the ambition and achievement of others - not just my grad school pals, but every single person alongside me at my uni.

Of course it's not to be expected that the accomplishments of others should be wholly ignored, but if one were to put all of that energy into accomplishing one's own goals, think how much healthier we'd all be.
[*]
Unlike Mike, I'm just about to apply for tenure so I'm not at the mid-career point quite yet. However, I like to read his posts as they offer a window into that future time.
In this last post about Ambition I'd like to offer another way to look at the situation. His buddy at MIT will have to work a tremendous amount just to keep MIT at its current level - it really isn't possible for a single professor to make MIT even better. But he - at his institution can put in a considerable amount of work and actually improve the university, the department, the students.
To me at least, it is more fulfilling to be at an institution (and department) that can be improved during my career as a direct result of my personal involvement. A major university is a behemoth that is slow to change, but Mike is more likely to make a difference at his school... plus the winters are better and there is the beach!
[*]
Oh, I see. Mike's a LOSER. Mike didn't succeed like his buddies, so now he's changed the whole game. He didn't just move his cheese, he gave cheese up and is eating cardboard instead.
I don't buy for one moment that Mike is content at Soda Flop College, just like he wasn't satisfied at Rural Raccoon. But for whatever reason he's given up any real academic ambition because he's not made the grade. I see this in so many of my older colleagues. I tell them about my recent publication and they tell me about their family or their golf game. As if it's the same thing.
I'm not saying that Mike isn't worthwhile. Perhaps he's a fine teacher. But teaching is so low on my list of priorities, and was instilled upon me by my mentors all through grad school. (Yes, an Ivy.)
Perhaps I don't even mean Mike's a loser. He's just not playing the same game as his friend from MIT is. He certainly isn't playing the game - at the level- that I am either. His decision to accept his limitations, fall out of the game his buddies play, and call his mediocrity a success, is just a shell game.