The Bitchy Bear From Boston Swings By To Straighten Us All the Fuck Out on Coupling, Ambition, and How We Spend Our Careers. 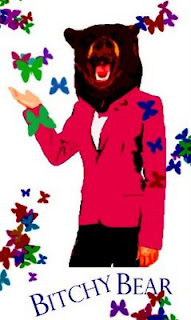 Ok, so now we are talking about Mike's decision to 'settle' for lack of a kinder way to put it. These types of discussions are interesting to me because I am ambitious. I wasn't held enough as a child so now my sense of self depends entirely on success, or the trappings of success. I already know this. I tried therapy and didn't work. Now I go with dirty martinis and scoring one now and then on my main grad school rival. He and I are not unlike Mapp and Lucia, our petty rivalry enacted with operatic fervor. I should be more evolved than this, but I am, alas, not. And neither is he. Oh, it's delicious fun, and since there hasn't been anything good on TV since they canceled Dynasty, it gives me something to do. So I scored one off him by finishing sooner. He scored one off me by getting a better first job at a higher salary in a much better institution. I scored one off him by getting a job an expensive private and turning down the job he moved to this last year in a state with steep pay cuts and furloughs.

Yes, some misguided souls may think life is about being happy with who you are and what you have, but we all know it's about the ticks in the win column and the toys which accompany those.

This is in stark contrast with my nonacademic spouse who, having no ambition to speak of, quit the game he was in to follow me. Well, not so much quit as retired by 40 because he had made so much money as a cubicle rat (oh, wait: cubicle "flower") that he could afford to just ... stop ... working. This is in addition to this wonderfully useful thing called "family money" that certainly doesn't exist in mine. So he is all of four years older than me, he's retired, and I am in a job where my title still involves the word "assistant." For many of you, this will not compute because you got your PhDs going straight through, and you started as an assistant in your 20s. For those of us who went out into "the real world" to work for awhile and then went back for the PhD, we were older when we started down the academic road, which is slow going anyway. All of my friends who started with me down my original professional trajectory have titles like "Chief" and "Directing" and "Managing" and "Poobah" while my title is "Assistant." This is even more depressing because even though I am in a professional field which loves to give lip service to valuing the faculty's professional experience, the silverbacks treat me like an older, uglier, yet-fully-in-need-of-condescension version of the shiny new 27 year-old assistant proffies in my cohort, who are all perky-breasted, wide-eyed young things that hang on the silvers' every word. Nice kids, all of 'em, but kids nonetheless. I am an (old) woman without a country.

Thus the academic-nonacademic marriage does provide a reality check about ambition. Still, nothing gets my back up like the phrase "the reason academic politics are so petty is that the stakes are so small." Would you spare me? The reason why Dilbert is so funny is that we all basically work in the place with the same people, from incompetent Peter-principle bosses to shiftless coworkers. It's not the assumption that academic politics are petty which sets me off; it's the idea that office politics everywhere else are somehow non-petty. While academics supposedly fritter away time on silly things and inconsequential squabbles, people in the Real World are engaged in struggles of life-or-death import, like figuring out how to do Lady Gaga's hair, improve pre-packaged cake frosting, and developing pharmaceuticals to help silverbacks get it up. Get the picture? Oh, I'm sure it's unheard of in the Real World to scheme over things like office space and salaries, right? Uh-huh. This is not to say that all of the "real world" is silly; people do work that saves lives every day. But so do we in academia. Some of us are, in fact, working to try to cure cancer and AIDS and prevent car crashes. And just like the people who try to figure out how to make cake frosting and sex better, many of us academics work at things which make this rotten world sweeter and more pleasant, like the life of the mind.

So even though we are all in the academic context, there are really really different jobs within that context. There is usually at least one essay a year in the Chronicle berating young graduates not to think they "are too good for teaching jobs." That essay makes me want to barf every single time because it's not that I think I am "too good" for a 5/5 teaching load, it's that I don't want that job, just like I don't want a bunch of other jobs ranging from US President to homicide detective. A friend recently got tenure at a nearby community college, and he's been swaggering around attempting to rub it in. I'm happy for him, but I really wish he would stop acting like I'll crumble into a fit of jealousy at any moment. I don't want tenure at a community college. It's not that I think I am "too good" for it; it's that I don't really enjoy teaching that much. I prefer writing. If I were faced with the choice of a teaching job or going back to my profession in the "real world" I would go back to the real world. Is that so wrong? If you yearn to be in front of a classroom, rock on, and who cares what your advisor and peers think. Frack 'em. But let's not pretend the questions Mike has grappled with are all just a matter of irrelevant ambitions and specious hierarchies, though some types of academic jobs and settings do (unfairly) have more status than others.

These questions also come down to what you want to spend your time doing, and that is a reasonable criteria on which to make a life decision.

Mike, from one regular columnist/punching bag here to another: Best of luck. It takes time to figure out what you really want given the hand you're dealt. Now I've got to go and figure out how to make sure my rival knows I just got asked to give a keynote. Maybe I'll circulate the program via the proffie listserv...