Bella from Burnt Hills Shares Her Migraine With Froderick. 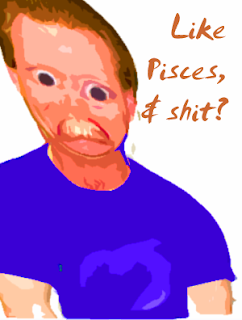 I feel bad for Froderick. I bet astronomy really was very elite in the 70's. I'm not sure it isn't true now. But I went to college in the early-mid 90's, majored in chemistry, took three astronomy classes and got into Columbia for astronomy. And I can't be too smart, or I would have gone for it and had all those cool conferences in Hawaii and observing trips to the Canary Islands to go to instead of sticking with frigging chemistry and getting to work in a windowless lab and to whoop it up in a Ramada Inn in Ohio every couple of years.

I'm an adjunct with a crazy mish-mash schedule spread out between colleges and private high schools. I currently teach AP physics and the kids these days have been brainwashed to think there are "alternative" ways for their "special learning" and that as their instructor, I'm obligated to show them the "other way" to do every problem. Like with out any of that pesky "triangle stuff."

I even have kids who've stomped their feet and held their breath until they've been placed into physics, let me re-iterate, AP physics, without any trigonometry at all. And then it's my fault that they can't apply Snell's law in a basic problem designed to introduce the law; i.e. the easiest possible application of arguably the easiest equation in all of intro. physics. Never mind that they have no idea what "sine theta" means.

But that's not where it stops - when the AP exam is over, it's time to review for the Regents exam (an exam that used to get some kids a somewhat more prestigious HS diploma than their peers who opted out, but is now forced on everyone and is essentially meaningless). A time I expect to be the wake-up call - some practice tests where your grade in percentage terms is supposed to mean what you think it means. A time I expect them to sit with paper and pencils and discover that they don't know how to think. But what happens? I give a few practice tests and they get high 90's. They know nothing, but the state has decided you're a super-duper wunderkind if you can pick through a "reference table" and transcribe random facts to an answer sheet.

They can't think their way past naming a class in which they got a B in HS. And thanks to an array of meaningless Regents exam setting the standard, it's not that hard to get a B in something.

It all goes back to the debates about the new "everyone has to go to college" culture. There is no curiosity. You can't read a physics paper if you aren't curious about it. But there is no curiosity. They can't live at home anymore if they don't go to college, and they don't want to get jobs, so they go. They have no passion about anything, so it doesn't matter what they major in.

They would hate economics, music, Spanish or history just as much and instead of Froderick wondering what they're doing there, it would be some other professor pulling her hair out.