Some Thoughts on Texting. And Why It's the End of the World. 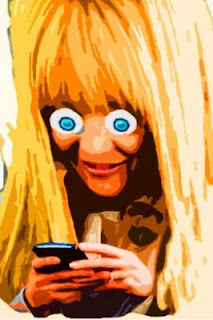 Unlike some of the behaviors we’ve faced in the past, texters are addicted, and they don’t care because nothing is as important to them as the feeling of thumbs against the key pad.

I find that most of my students behave best when I behave erratically. That’s right. At any given moment, I’m likely to go nutso on them.

I give a speech during the orientation at the beginning of the class – no late assignments, don’t skip class, blah, blah, blah. I look around the room and say “no electronic devices. I can live my entire life without hearing your ring tone.” I show them how they look, cell phones in their lap trying to sneak a peek. I make fun of the kind of inane messages they send. I tell them that my reaction will be based entirely on what kind of day I’m having. Then we start.

I’m as likely to scream incoherently at an offender as I am to make quiet requests. I’ve stood over a texting student and asked them to read the screen. I’ve given them responses. “Dude, this instructor is nuts. She’s going to throw my phone against the wall. I’ll turn on the camera so you can see yourself moving through space” or “meet me outside, I just got kicked out of class.”

My latest approach, probably because it’s late in the semester and I’m as ready to be finished as they are, I ignore it. That’s right. They text, I teach. I have a no repeat policy – I give instructions once and that’s it. When they miss them I smile and say “LOL, dude. Sucks to be you, huh? Maybe you can text someone who has been paying attention to get the assignment.”

I’d like to ban cell phones entirely, but the college just put out a text message warning system so they all think they have to keep their phones on just in case class is dismissed due to inclement weather.

Sucks to be me, too, apparently.