Todd from Trenton Wonders Why Some Teeter on the Edge of the Academy.


The Fall semester after my Dad had a heart attack, I found myself a bit overwhelmed …and unemployed. I had run through my program’s allotted 3-year funding promise (which ignored the fact that few graduated before year 6), so I needed to find something to pay the bills while I tried to continue with my research and exam prep. By fortune’s favor, an e-mail appeared on the departmental listserv requesting an adjunct instructor at Cross-Town U. CTU was a tech-heavy school, but the class was actually in my exact specialty of study. I was perfect for it! So I applied. 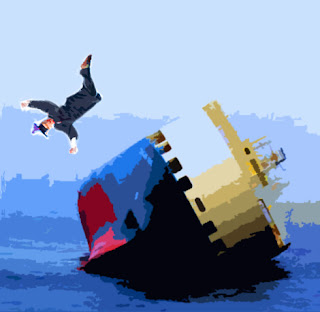 After being contacted by the faculty scheduler, we arranged an appointment for my interview. The building was hot as an oven, and when I made an offhand comment about the hot day, I apparently offended my interviewer. Oops. During the course of the interview, I was informed this meeting was simply a formality, that I already had the job, and that I just needed to make the class fun for the students; I could even let them out early if I wanted! Yes, this was at a “respectable” university that many of you have heard of. I smiled, nodded, and then resolved to teach the course seriously, fully expecting my students to do the same. Don’t laugh.

The first day of class went well, but a student approached me with a problem at the end. See, he was finishing his senior project and he needed to skip class the last 4 weeks of the 11-week quarter to finish it. I was stunned, but since I didn’t know the campus culture (other than to “make class fun!”) I told him I’d have to think about it. I eventually told him he’d have to come to every, single 9 a.m. class session for the entire 11 weeks (except for the allowable absences, which amounted to 15% of the term). He was grumpy, but did it.

Several of the students made the semester hell. One student not only performed poorly, but plagiarized on a paper; I reported him to the higher-ups and he proceeded to stalk me for 3 months. Another student claimed her father died, then handed in a plagiarized paper; it killed me to have to turn her in, but I decided not to fail her, a decision I now regret. Another student stole definitions from online for a paper instead of following the instructions and writing them himself. Other students disappeared, never to return. But, despite these problems, there were a bunch of engaged, involved, motivated students (including one dislocated after Katrina) who seemed to appreciate the rigor. Even Mr. Senior Project wrote me a few e-mails thanking me for making him take the course seriously; surprise, surprise, he actually learned something!

But, I wonder, what would have happened if I had dumbed stuff down? I’d still be employed there, for one; CTU made MAJOR use of adjunct labor, with almost 80% of the courses in that department taught by adjuncts. My reports of plagiarism and student malfeasance did not go over well. Apparently, I’m a bit of a troublemaker…despite the A-students thanking me for opening their eyes to stuff they weren’t taught in their hard science courses. But the pressure to “make class fun!” and grade easily was always there.

I also wonder if something similar happened to the OSU TA who had the meltdown. Was she under pressure from some faculty and students to lighten their load? If you read the comments to the linked article, you can see a strand of “Chem is a stupid class” comments from students. How many semesters of that sort of attitude might it take for any of us to break? For me, coupled with other problems, it was 2 years and I‘d had enough.

I miss teaching. I miss engaging the students who are capable of being taught, who WANT to learn. I miss seeing that light-bulb moment when they get it, like the young Fashion Design major who totally got that complicated sociological phenomenon and revealed it, hesitantly, to the rest of the class with the best example I had ever heard. How many of us are 3 crazy students away from unemployment?