This Is Why We Never Let Our Names Appear in the Course Schedule. The Curious Case of Bucky and the Boot. 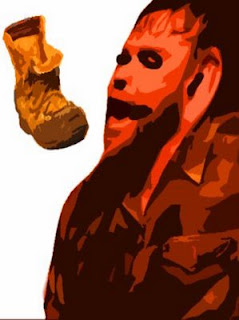 He’s back. Or at least he will be. The student who must have had the absolute worst semester in the history of higher education.
Let’s call him Bucky. Bucky enrolled in my class last semester and seemed like a good enough student. He asked questions (legitimate ones) and his first assignment was good (B material). Then, hell opened up on Bucky. His brother went into the Coast Guard, so he became responsible for caring for his brother's ailing mother-in-law (who happened to live twenty miles out town).
Then his bike was stolen. Then his boss at work doubled up his overtime. He missed turning several assignments during this time, and never made any effort to make them up. Then he came back to class for about a week and seemed to be getting back on track, turning in a topic proposal for the final paper and presentation. Then he disappeared again.
Two weeks later he told me he had been receiving threats from someone. And then a passenger in a car had thrown an old work boot at Bucky as he crossed a street near campus. He was now too scared to leave his dorm room. Even with his previous undocumented absences, I wanted to take his claims of threats seriously. Only I hadn’t heard anything about students being threatened in this way.
Thinking maybe I had missed something, I checked with campus police to see if Bucky had registered his complaints with them. They had heard nothing. I told Bucky that I would need to see the police report to excuse the absences and accept the assignments he’d missed. I never heard back from him, and with all his missed assignments, I failed him. Honestly, I was glad to not have to deal with him anymore.
But he’s back. Today I was checking my class rosters to see if I recognized any names, and there he was. He had registered for my class again. Now I don’t know how to react to him when I see him on the first day of class (if he shows up). Do I ignore him and hope that he is just a normal student this semester? Do I take him aside and let him know that I really don’t feel like dealing with his drama this semester? Ask him to take the class with a different professor?