The Terrified TA From Tazewell Emails a Semester's Worth of Pain.

I worked as an undergraduate TA this semester, and boy, there was a lot of pain. Though departmental policy prevents me from grading the real juicy stuff, I did get the titillating opportunity to get to know these students... personally, through their daily assignments and their excruciating behavior in class.
By "personally," I refer to seeing all the shades of 'wrong' amongst them. I learned that Dimwit Derrick sounds coherent and thoughtful in type, but can't scrape together two correctly spelled clauses to save his life without the omniscient power of MS Word's spell-check. I stopped to think once, "Am I a dick for writing 'You're better with spell-check'" on one of your hand-written masterpieces? ...nah. And poor Bawling Belle! She must have been bawling, anyway, to take advantage of Perky Prof's lenient late-work policy four unique times due to separate medical emergencies - none of which were hers - and deaths in the family - none, of course, in her immediate family. Those grandmas and aunts are just hardwired to drop off as deadlines approach.
I won't forget you two either, Sorry Sarah and Belligerent Beth. You sat right by each other in class, and when I began to see your assignments handed in together, Sarah's sorry ass half the time of Beth's, I scrutinized your assignments a bit more carefully. The structure of your answers identical, the tenor of your opinions embarrassingly similar, one differing from the other not in ideas expressed, nor in their order, but only in vocabulary spluttered, I clearly remember availing Perky Prof about the situation. All the circumstantials fit: Beth was the better student, doing the homework for the less gifted roommate. They had let on they were friends in class. What a bullet you two dodged when Perky Prof regretfully told me they just weren't similar enough to make the call. I think he just wanted to let you off easy. 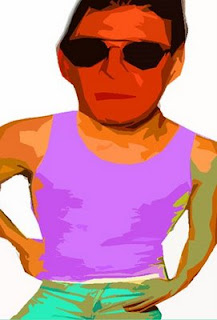 There's always the obligatory cell-phone whore, this semester played by the part of Clueless Collin, the bored major who showed up for every other class, sat in the front row, and messed around with with his iPhone every time he deemed to show. You told me you dropped your most challenging class. If you can't stand making it to this one, why the hell couldn't you have dropped it instead? Ah, that's right. No conscience about education. Oh, and who could forget Skater Sean, who walked in every class period at least 15 minutes late, sporting aviator sunglasses in November -- after six inches of snow -- clearly still tuned in to his ear buds, until gallivanting out two minutes early. Every class. The only intelligent thing you did this semester was hand back your evaluation sheet blank.
There were also those embarrassing personal moments, when by inviting me into the depths of their souls, I realized that these snowflakes were really scraping the depths of their brains to get past incoherent theistic conceptions of the mind, consciousness and personal identity. You couldn't even get the well-argued theistic positions! If you don't even understand what you believe, chickadees, can you really expect that your intuitions, poorly stated in class, will hold any weight? Dear Perky Prof: THIS is why the folk don't matter -- the folk are drooling into their purses at 1 in the afternoon, ignoring their professor's meticulous explanation of why their last paper sucked and exactly what they ought to do to improve their performance. They aren't intelligent enough to understand the value of taking classes outside their major (which is clearly pathetic, having taught them zero critical thinking skills), and they're certainly not coherent enough to aim for basing our theories around conformity with their intuitions. When you ask a question about the readings, Perky Prof, the folk sit around saying "I don't care" while I, the obvious TA-plant, raise my hand yet again to give the scripted response to the argument that they should have had no problem understanding.
The saddest part of the whole ordeal, the most terrifying at worst, is that these darling little inflexible snowflakes are my future. They are my future financial advisors and second-grade teachers for my kids (god forbid those ever happen). Their obvious lack of adaptation skills will just make them great lawyers, won't it? Oh well, I suppose they'll learn or drop out anyway. I sure as hell know they can't be my friends, though. Anyone so certifiably dimwitted as to not only not recognize but to staunchly deny the value of reaching out beyond one's current beliefs and actually interrogating them is a static, worthless excuse for a human being. You can't grow into real individuals, or have real relationships -- you'll only grow in your inertia and become further caricatures of the husk of potential your darling Pissy Parents may have once raised in you.
Perky Prof is a hopeful man. He lives in a world where we can make a difference in these poor kids' lives, and his optimistic, comprehensive research/service projects reflect that fact. But my poor Perky Prof is just setting the bar simultaneously too low and too high for these incorrigible little demons. After all -- they really can't be that high up on the food chain if I, the future poor, overworked first-year grad student, get to decide their fates next year.