One of Many Notes We've Received About Walt. 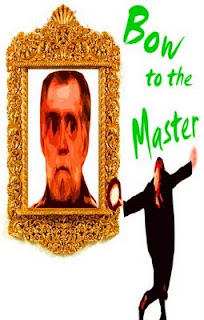 Maybe I'm a buffoon, but I really care about the whole Walt problem.

I admit that I'm a fan, and I come back to RYS fairly often hoping to see his name (and disturbing likeness). What "really" happened with his recent departure from the site is really not my concern. (I'm about half sure that it was all an act, anyway...)

But what I do want to say is that Walt, whoever he is, is one of my academic mentors. I beg you to find a way to let his voice ring out again.

Okay, he's a nutjob. He's likely a little insane. But his posts have actually encouraged me to be less fearful in my career, and no advisor or colleague or mentor has ever been able to do that for me before.

What Walt does (and what this whole page does, really) is offer up the courageous path to all problems. He doesn't recognize fear or weakness. He blusters through acting as if he were right, as if the work he's done to become Professor Walt entitles him to lead the way in his own career, his own classroom, and in his own research.

Of course it's overblown and hyperbolic - what on RYS is not? But whenever I finish a Walt post I'm more prepared to face my own situation here at Mediocre and Sad College Where Dreams Go to Die.

Some Walt-isms that I love:

It seems to me that I've been surrounded my whole career by folks who don't say what they mean, folks who play the academics-as-politics game. I feel that I've been encouraged by colleagues and administration to let students walk over me in favor of higher evaluations and more FTEs!

Walt is one of the few people I've "met" in the academy who says it like it should be, and I think we're poorer for not having his voice on the site.