You Can't Make This Shit Up.

Professors: be about the students
by Paul Flowers
Southern Illinois Daily Egyptian 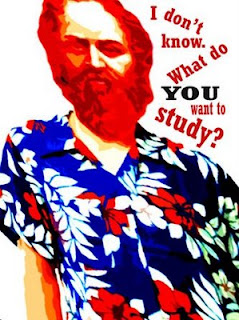 Socrates once said that the wisest man admits he knows nothing at all.

Well, it is obvious that Socrates has never had a conversation with a person wielding a doctorate - especially a college professor.

I have had my fair share of instructors at SIUC, but none as interesting to learn from than those that call themselves "Dr. Xyz." Some of them are almost a different breed. I'm not alone in my thoughts. There are even professors that think the same way and have began to do something about it.

Have you ever had a professor that is too smart for his or her own good?

They write their syllabi using more jargon and three-dollar words than the medical profession. Yes, those professors. You know them. The ones that have tenure from Toronto to Texas and may bite your head off if you address them as "Mr." or "Ms." instead of "Dr. "

They teach their courses as if they are having informal discussions with their colleagues.

It may have not occurred to them that they are teaching undergraduate courses, or maybe it is that they enjoy torturing incoming and rising level students.

What they seem to have forgotten is that they were once in those positions.

They forgot what it was like to sit in those classrooms with tens or hundreds of other students they don't know, listening to a professor that they cannot understand and trying to grasp information that they have never seen.

The problem is, when a person gets to a certain level of education they begin to think they know everything.

One solution to is one presented to me from a teacher from my social justice and leadership class. In her syllabus she listed herself as the "instructor/learner" as opposed to just "professor/Dr. Xyz."

I understand that this particular scenario is not feasible in every subject setting. However, there is a way that even a top biochemical professor can learn something from students, if they take themselves out of the way and open up to the idea.

This may stir up some coffee cups in the lounge but that is to be expected. It is nothing to take offense to, just something to learn from.

My parting thought on this is simply for the professors to remember, there was a time when they were in those very same seats.

There was a time that they too knew nothing and had to spend extraordinary amounts of time trying to grasp the simplest concepts. If the professors of our prestigious university would take the time to get back to these memories and think about those times, we, as students, may not be so afraid to come to their office hours. It wouldn't seem like a door with "Warning: may try and lose you in conversational jargon," but it would have more the appearance of a traffic light that's always on green with a yellow-brick road leading up to it.

This is student-based teaching.

This is how the student/professor relationship prospers.