They Don't Entertain Us, Why Should We Entertain Them? 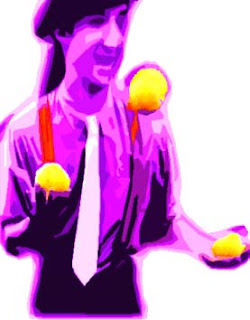 Two items in my always-overstuffed email inbox caught my eye this morning. One offered me the glorious opportunity of coming in on my day off to listen to a speaker discuss ways we can reach our students through Facebook and MySpace. The other asked whether I was intrigued by the possibilities of using Second Life (a “Virtual World”) as an instructional tool. I’m sorry, but I am not intrigued, nor am I planning on spending my off-time listening to someone telling me how to reach out to students who can’t be troubled to reach out to the alarm clock each night to be sure that they get up in time to attend my class. When is this shit going to end?

When did it become my responsibility to meet students half-way, let alone going all the way over to their turf, to keep them interested in my class? What makes anyone think students would respond better to having a two-dimensional simulacrum of themselves listen to a two-dimensional simulacrum of me lecturing in a virtual classroom? What’s next? Virtual teleconferencing? Your on-screen persona watches a virtual television broadcast of my lecture, performed by my pre-recorded on-screen persona? Despite the Escher-esque subtleties of such a teaching environment, I just have to say “Fuck that.”

What folks don’t seem to be getting is that anything that is cool for students is cool because it violates the rules of the academy. I’m trying to imagine how I would have felt if an instructor had told me, back in the ‘70s, that he was going to teach me about Sociology by playing a bunch of YES albums and playing Dungeons and Dragons with us. The closest I can come to the reaction my 19-year-old self would have had is: A) What a dick, and B) I bet I can pull an A in this class with absolutely no effort at all, as long as I don’t let him know what a dick he is.

Can we please dispense with technological attempts to teach those who would rather be entertained than taught?