"Watson, Come Quickly. We've Solved the Case. It's the Guy Who's Already Given Himself a 94 for Next Week's Exam!"

Most just cheat off their neighbor’s exam. Instead, you broke into my office and changed your grade on my computer. Allow me to critique your efforts so that you might do a better job next time. Somewhere else.

Concept. Grade: A
You broke the lock on the building door, removed some ceiling tiles, then crawled over the doorway to get in my office. You changed your grade and then snuck out, all in 30 minutes. Impressive, as Lord Vader would say.

Breaking in. Grade: D
It’s all about the details, son. I wouldn’t have noticed that anything was amiss and couldn’t convince anybody that you broke in, except for your dirty shoe prints on the walls and desk. Don’t forget to wipe your feet next time! 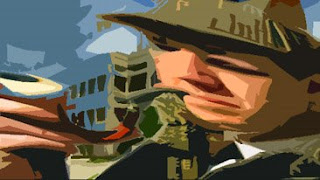 hanging the grades. Grade: F
At that point, your objective was pretty clear to me. Good thing I have a backup grade file. As I booted up my computer, I worried: How am I going to detect which little shit did this? Only an idiot would change just his own grade ... Oh, I see. You are an idiot. You changed only your grade. I was ready to be Sherlock Holmes but I was dealing with Blues Clues. That disappoints me.

Selection of victim. Grade: D
Why me? You needed to raise your GPA. Fair enough. You were probably too stupid to realize that you were getting a C in my class anyway.

Alibi. Grade: C
This was your ultimate downfall but you almost pulled it off. Your roommate was clearly covering for you and the disciplinary committee was about to give up when he spilled the beans. In the future, remember: dead men tell no tales.

Overall Grade: C-
It’s a great war story to tell my friends and it will be one of the best non-Walter RYS posts, so those are points in your favor. However, you really are a stupid, worthless piece of crap for doing this.

Extra Credit:
I’ll raise your overall grade if you break into the office of that Student Affairs jackass who merely rescinded your financial aid (the only way you could stay in school) rather than putting this on your permanent record and filing charges with the police.