At Least Students in a Classroom Can Be Reached With the Mighty Throw of an Eraser, Or Winged By A Wicked Sidelong Glance.

Several years ago, I became one of the first profs at my institution (large community college in the Midwest) to teach a course online. Now I regularly teach 3 sections online and 3 on campus and as a result, contemplate suicide at least twice a semester. 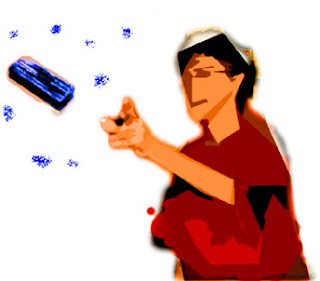 Seriously, though, I'm about to lose my mind. For three consecutive semesters, I've had at least one student in an online class post incredibly disrespectful and disparaging comments about me on our online board, as if I would never read them. This is not only disturbing to me, but other students complain as well. I currently have one who seems to think she can teach the class better than I, and she finds it necessary to make underhanded and snotty comments whenever and wherever she can--of course, never directly to me. Only to other students.

In all cases, this behavior started after I pointed out an inconsistency or a lack of logic on their part in a discussion post. They're lashing out because they can't take being corrected in public, despite being told at our orientation that any corrections to discussion postings are made publicly so that everyone in the class doesn't continue with the same misconception. I tell them that if they are uncomfortable with public correction, then an online course is not for them. And yet they forge ahead, only to become whiny babies when that happens.

And of course, I have to be the professional, never allowing myself to be goaded into a flame war. Usually I just delete their idiotic messages and send them a private email reminding them of the student code of conduct, but I feel that I'm teetering perilously close to the edge and am about lash out and squash one particular student like a bug. And feel good while doing it.