A View of the Modern Student From A Pre-Modern One.

A professor friend of mine just shared a handful of the e-mail grade complaints she received from students. In each case, the student failed to complete a significant portion of the coursework...and seemed completely unaware of doing so [or not, as the case may be]. One student didn't do the oral presentations [you know, stage-fright and all], another plagiarized [and didn't understand how cut+paste was plagiarism], and the other 2 didn't hand in small assignments, did mediocre on the big ones, and just failed to grasp how math worked against them ["But I got an A on the midterm! Shouldn't that count for more?"]. 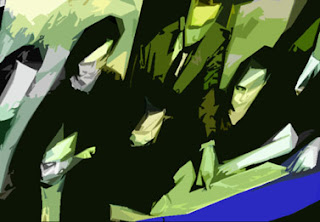 After reading the e-mails, I told my mom about them. My mom is retirement-age and barely got through high school in her day [poor people often didn't graduate H.S. c.1960]. She just shook her head in astonishment. She is habitually stunned by these tales of the "modern student." She simply cannot fathom how any of us who teach college tolerate the student insolence, willful stupidity, and complete inability to do basic work for a college class. My mom never dreamed of going to college, but each of her 3 children knew how to succeed in high school, knew how to learn, valued our educations [even though I, the youngest, am the only member of my extended family to earn a BA and MA]. "I can't believe these people are in college," she habitually murmurs as she shakes her head at each new daily gem from RYS.
Students abitually called me "arrogant" or "mean" because I actually expected them to do basic-level academic work, a workload that my mother remembered from 50 years ago when she attended high school! You know, back when they had to write papers in longhand. Back when an electric typewriter was a luxury.
What has changed so much in 50 years that a typed 2-page paper is beyond the ability of a college freshman to complete in 2 weeks with a minimum of errors? What has happened that common courtesy for one's superiors, one's elders, one's teachers, is no longer something one can assume to establish a simple working relationship? Why can't a significant portion of today's college students grasp simple math [fractions and ratios!] or write a simple sentence [you know, with a verb] or even craft an appropriate paragraph [that doesn't go on for 1-2 pages]?
Many students think professors should act like they aren't better than they are....but we are! We've earned the right to be treated with simple dignity for having received 2-3 times the education of the brats sitting in front of us. I deserve to be treated better than Frankie Frat-boy's "bro" sitting next to him. If I'm the one assessing the work, it's in Gary Undergrad's best interest to listen to directions I am explaining. Or read that book I assign. Or actually turn in work on time, at the deadline. That's their job, not mine.
Not all students act horribly...and it's those students I worry most about. When Paula Plagiarist gets a C because she whined to a faculty-hating administrator about her F, what does that do to Marvin Mediocre who actually earned his C by performing with a basic level of competency? When Big-Mouth Barry bombs a class, bitches his way through a grade grievance and is awarded a C just to go away, what does that do to Sally the C-Student, who had some health problems and earned a C because she came to the final exam with a sinus infection?
I am sick of the undergraduate whine of "It's not fair!" when they don't like their grades [as if they had no hand in the performance being assessed]. Whenever that phrase leaves their lips I know sitting before me is yet another entitled 13th-grader here for a diploma instead of an education. It would be unfair if I awarded a grade on how much I like them. Instead, I have a rubric based on clear instructions given before the assignment is completed. Oh no, that's not fair because I don't tell them exactly how many points each item is worth. And when I do that, it's not fair because I awarded too many points to something that's unimportant [which usually means the student just didn't do it and has sour grapes].
The only unfair thing about the situation is that I wasn't born 30 years earlier, when my education probably would have been free and every third student of mine wouldn't have been a reject who should have been Left Behind at the Judgment Day called High School Graduation.