It Should Not Surprise You That We Get a Lot of Manifestos at the Compound. Few Have All of the Words Spelled Correctly.

This might surprise you guys but a lot of profs around here—gasp!—complain about the students. I'm here to say that a good chunk of this complaining stems from a mistake on our part.

Now don't get me wrong. I'm as tired of you indignant little unliterates as the next prof. (The Urban Dictionary defines an "unliterate" as a person who appears to know how to read and/or write however refuses to do so either knowingly or unknowingly.) I'm so jaded by you and your excuses that I don't even give a crap when MY OWN grandma dies. But I'm not here to bash you or your whiny excuses. I'm here to bash me and my whiny colleagues. 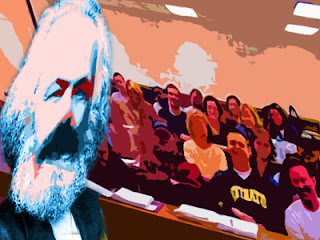 The gist of our whining is this. You people have no interest in learning anything. This is why you never really do the reading or any of the assignments—hell, you don't even the read the syllabus. If you do anything at all, you do what it takes to make it look like you've done the work. What that amounts to ranges from doing the absolute bare minimum, to not even doing the absolute bare minimum but pathetically trying to give the appearance that you have (16 point font anyone?), to outright criminal activity. (A few semesters ago a student plagiarized her 3000-level philosophy course term paper from something written by Wilfrid Sellars. That's a little like handing in the U.S. Constitution as your poli-sci paper.)

We know, we know: there are exceptions. And we love you who are the exceptions. You are what keeps us going—both of you. (I promise to pass on the next easy shot.) Even though exceptions exist, this is the rule and you people really ought to be ashamed of yourselves. Seriously.

What's wrong with this complaint about you people is not that it isn't generally true. It is true. What's wrong with it is that overlooks the fact that your behavior is not only understandable but perfectly rational and justified. Here's why. All your life, you've been given very good evidence that the rules you live under are, for the most part, completely ungrounded, enforced more or less at whim, and written up and represented by people even dumber than you. So why should you bother following them?

You can fill in your own examples. Think about all those times you knew that some rule or practice was silly and unnecessary. When you asked why you should follow it, they said, "Because it's the rule" or "Because I said so." And you knew those aren't really reasons. If you decided to break the rule, maybe you got caught, maybe you didn't. When you were caught, the punishment wasn't what they said it would be. It was usually more lenient or it was nothing at all. In the rare case where the punishment was stiff, it might have convinced you not to break the rule (or at least not to get caught breaking it). It didn't convince you that the rule isn't stupid. And why should it? But, assuming you aren't reading this from inside a correctional facility, you learned to put up with it and follow the rules anyway (or at least make it look that way).

Your experience at this place is more of the same. There are a bunch of rules and requirements that look really stupid to you. This is because they are. (Don't forget to use your new 28-digit ID# when you register for that mandatory health class.) But even when they aren't stupid, no one can really prove that to you. And even if they can, it doesn't matter because you learned to stop asking about that kind of thing a long time ago. You learned to get along by following (or pretending to follow) the rules even though your heart isn't really in it. And that, you've found, is good enough for us.

That's why you don't even read the syllabus. And why should you? You've got really good evidence that a syllabus consists of either vapid nonsense ("this course will facilitate critical thinking skills necessary to face the critical problems in tomorrow's world of critical tomorrows bleh, bleh, bleh") or policies that are never enforced. (What did the syllabus say would happen when you didn't bother to show up for the exam? What really happened?)

If the syllabus isn't a bunch worthless nonsense, the course is. It's nothing that you are interested in even if it is part of your major. That's because your major is uninteresting. Why major in something uninteresting? That's another question you've learned not to ask. And, unless it's one of these clueless right-out-of-grad-school-I'm-here-to-make-a-difference hardasses, it looks like the prof is privy to the whole thing. That's why he lets you and everybody else pass even though none of you did jack all semester. He keeps his stupid little job; you get your stupid little diploma. In an environment like this, the only thing harder than getting a really good grade is getting a really bad one. That's why you never bother doing any real work. And why should you?

Our whiny exasperation over your pathetic behavior stems largely from a failure to understand this very understandable rationale. Now, what could we (students, profs) do about all this? Profs could probably stop bitching so much about the students. But we won't. For one thing, it's a helluva of a lot fun. (Next time you're at the off-campus pub and you want a good laugh, sit next to the dorky looking "old" guys in the tweed jackets. But don't get offended when they laugh and tell the one about when you cheated on your Ethics exam and then cried like a little nancypants when you got caught.) On the other side, students could probably take their own education and lives seriously. Although I believe everything I've said so far, I also believe that you could get an education at this place and even come out a better person than you were when you came in. But you won't. For one thing, your experiences in life prevent you from taking any talk about "education" or "bettering yourself" seriously at all. And why should you? That's just the kind of meaningless crap you read on a course syllabus. Isn't it?