The Return of Wicked Walter.

It's been quite some time, but Wicked Walter from Waxahachie returns today. After his first post back in August, most readers thought he was a put-on. But, as we sometimes do, we tracked him down. He does exist, and is a professor at a large state school in Texas. (We don't think he's really from Waxahachie, however, because we're pretty sure a nutjob like him would get run out of a nice town like that.) Anyway, Walter is back. You may want to avert your eyes.
*** 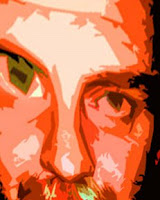 What in God's name are you smoking out there on the compound? This site has gone to hell in a hatbox, and I've decided to mobilize myself to save y'all's bacon!
Just this past week I see you let your crazzy-ass, cat-lover nutjobs duke it out with the Depends-wearing old codgers who couldn't chew a decent piece of meat with borrowed teeth. That's a non-starter. Don't let the crazzies have an open forum.
I'm the answer to your problems. I'm neither junior or senior. I'm right in the middle of it all, and I say, quit bickering among yourselves and let's save the venom for the real evil-doers: students, administration, Wanda in the cafeteria, and Roger the I.T. guy with his little screwdrivers and tight trousers.
Seriously, here's what to do to get back on track. You can thank me later. I got a million good ideas, and I'm happy if you just want to name one of your children after me:

See. It ain't hard. I spent 9 minutes on this and I came up with 20 ideas better than you ever had in your lives. And I'm not even breathing hard.

Listen, get back to me on this shit right away. Last time I wrote you didn't say a damn thing.