A New Student Hero To Annoy Us: The Arrival of Alphabitch! (Plus Someone Sneaks In Some More "Junior Faculty" Juice.) 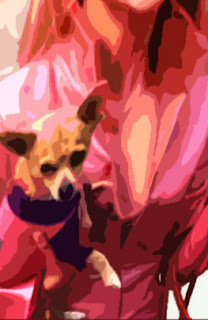 After midterm exams, I decided to curve the grades so that 20% of my class would not score below 40%. Alphabitch, who marches into my class exhausted from her hectic life every MWF, is extremely angry at the outcome. Alphabitch is pre-law. Someday, wearing pink suits and carrying a little dog, she will rule the planet—all of us. In her dreams, she stages a coup in the magic mushroom kingdom and “recruits” the Smurfs into chiseling, rolling, and floating two ton blocks from rocky crags in Greece for construction on her 200 foot image in Santa Fe. By law someday we will all be forced pray to this statue at the sound of the timbrel, or Pink’s latest album.
Alphabitch is not happy with the curve, and she’s angry with me (she’s angry with anyone not speaking with a key turning in his back). She studied hard, and it is not fair that she only gets 4 points on the curve, while her inferiors got 15; she clearly deserves 15 points as well. Though she certainly did not get the highest grade in the class—she scored a B- on an admittedly hard exam—she smells a rat because the curve did not raise all of the students’ grades the same number of points. She informs me, in her ‘agitated lawyer’ voice, that she “has never heard of a curve” like the one I gave the class, and she has even asked one of her professors about it (inevitably the one with his lips on her butt). This professor, who must have been from the department of cosmetics, agrees there is no such curve that awards different amounts of points to different students. Despite the fact that her understanding of a curve has nothing to do with a normal distribution, I am forced to “dialogue” with her so that she does not take her complaint elsewhere.
As a junior faculty who wants to secure “just a job,” I have to get good evaluations, because in this democratic world some 21-year-old iPod-addicted, narcissist’s opinion carries more weight than my own. In order to get good evaluations, I have to radically inflate my grades. In order to even get to the part where I enjoy my job, I have to pamper arrogant students for three more years—and even then I’m not guaranteed tenure.