Adjunct Whore’s idea of failing her more disagreeable students is pleasant to contemplate but also naive in the extreme. At my university, the writing program (not to be confused with the MFA program) is effectively a separate entity from the English Department, with its own rules and Catches-22. Instructors in composition are required by partially unstated policy to grade on a rightward-shifted bell curve, with the “sweet spot” hitting at about B+. So, out of a class of 23 students, 12 should get a B+, 8 should get an A- or C, and three should get an A or D. Generally speaking, D’s are highly discouraged, so generally one awards three A’s. 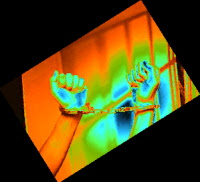 The writing program wants complete consistency – that every teacher should grade like every other teacher. Why? Because writing is a subjective discipline, and the omnipresent shadow of potential student complaint requires an irrefutable system of demonstration to quash it. The writing program is not interested in the writing process, but in processing students through its labyrinth of required classes. If a teacher were to fail students for anything other than assault – even failure to show up might be contested – those students would back up in the system, and clog writing classes until graduation, requiring the hiring of more instructors, requiring the program to spend more money, requiring the program to have to increase its budget request, and thereby landing the program on the shit side of the Provost.
Failing students might also be seen as indicative of the program’s failure to educate, also landing the program under the microscope of the Chancellor. So, failing students is considered to be a failure of the instructor to teach; failing more than one student over the course of one’s employment – and then only for assault – will result in the instructor’s being blackballed from teaching while he or she is connected to the university.

To add to this, Adjunct Whore’s idea of imposing Nabokovian quizzes is impossible; students cannot be graded on assignments that have not been set out by the course director.

Otherwise, I would love to give my students the grades they deserve – not out of sadism, but out of respect for the verities of their performance.